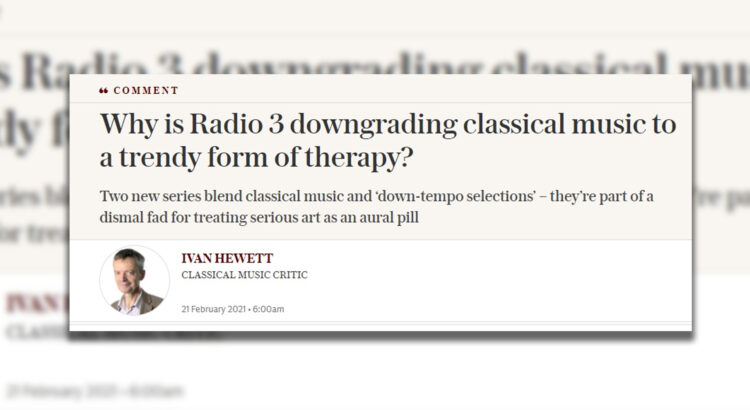 Ivan Hewett’s piece in the Telegraph last weekend (I’ve got to it rather late I know) roasting BBC Radio 3 about their two new mood-driven programmes is a difficult subject to cover here. I’ll give it a go though. I’m game.

On the one hand, I agree with Hewett. Music as something prescribed that will cure you of whatever ills you think you have is grossly misrepresenting the potential impact art can have on the individual. Hewett is – even if he doesn’t explicitly say so or realise it – worried about the rebranding of classical music, in the same way that those who love jazz always look over their shoulder at those who express an undying love for Dinner Jazz. Hewett is suspicious (and probably hates) ‘crossover’.

I sympathise with him. The music my neighbour proudly pointed to during a Christmas party (remember them?) a few years ago as ‘classical music’ isn’t what I’d listen to. But given that he was offering a generous platter of nibbles and is, like me, a big fan of red wine I wasn’t about to judge, dismiss or denigrate. I’d have to be some kind of an arsehole to judge my neighbour or suggest he listen to something different. Sure, I want Alan to be as moved as I often am listening to Rachmaninov (don’t judge me Ivan, I do like Rachmaninov), but I can’t make Alan listen to Rachmaninov. I’m certainly not going to tell him that he should be listening to Rachmaninov. Or Brahms. Or Mozart. Or whatever. You get my point.

This idea of music-as-therapy is absolutely everywhere. Playlists advertising the soothing and healing powers of classical music have become big business. The major names of this new trend are rapidly taking over classical music’s territory. For many younger listeners, classical music isn’t Beethoven or Stravinsky; it’s Max Richter, with his dreamy album Sleep, or Ludovico Einaudi’s slow, meandering piano meditations.

Why is Radio 3 downgrading classical music to a trendy form of therapy?

And whilst I get where Ivan is coming from (we don’t know each other), there are other things that are at play here that are worth flagging here.

We live in a fully-embedded on-demand world. I listen to the things I want to listen to when I want to listen to them. I don’t make my musical selections based on a deep-seated understanding of what my mood is and what mood I’d like to have, and then look for musical promises that can take responsibility for that mood transition. People watch the films or TV they watch for a whole variety of different reasons. They discover their own escapist routes using their own tried and tested methods.

What broadcasters have to do is anticipate what audiences think they need, and make sure their content is discoverable ahead of the competition. By doing that, those organisations that seek to underline their relevance to their audience and bill-payers will stand a better chance of renewing their source of income. What’s important is to be seen to be relevant rather than redundant.

To denigrate those who seek out curated music according to mood is to overlook the fundamental reason why rave culture took hold in the 90s. It reveals a lack of understanding of how digitally-savvy audiences access content. Audiences are fractured now, content sources and touch points for classical are far more than one just one authoritative source. The BBC is more than just Radio 3. The Reithian approach is on its last legs.

And more than all of this, to be so savage of those who seek out mixed musical experiences is to further misrepresent classical music. Listen to what you want to. But don’t judge people for their musical choices. If you do, then you’re not helping the greater good. You’re just projecting all us classical music fans as a bunch of snobs.