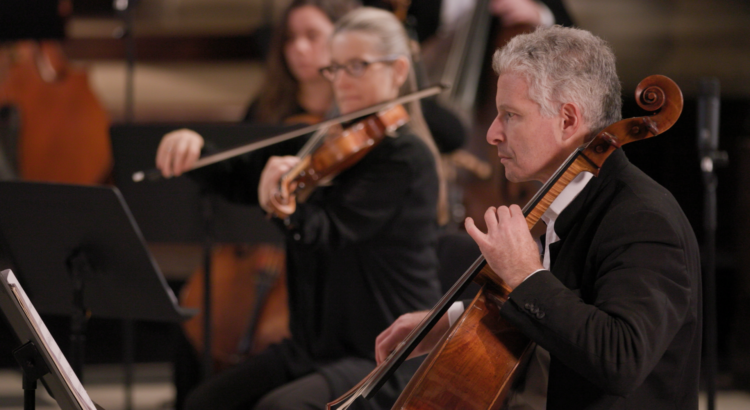 When audiences are able to step back into an auditorium, orchestras had better continue to film their concerts. I’ve got accustomed to digital streams.

The London Chamber Orchestra regrouped for the first time in a year to record their centenary celebration concert at St John’s Smith Square. The orchestra’s digital premiere on YouTube featured Graham Fitkin’s Vassal, Strauss Metamorphosen, and Shostakovich’s Chamber Symphony plus other musical excerpts. It was free to watch with invitations to donate.

The dramatic transitions between moods are daring, concise and efficient, maintaining a high level of energy, even in the contrastring contemplative sequences. The finished work is a captivating affair and still sounds as fresh given its premiere (by the London Chamber Orchestra) in 1998. In this performance there was lots of attack, slow crescendos, tingling articulation in the upper-string passages, and oh-so ridiculously warm strings when the score called for them – listen out for the recurring material first heard in the opening bars. It is a hugely satisfying listen, reminiscent of composer Paul Hart’s cracking opening 30 seconds for BBC TV’s Tomorrow’s World in the late 1980s.

Wasn’t quite so impressed with Strauss’ Metamorphosen. For a digital stream I suspect the intensity inherent in the work makes demands on both performers and video direction because of the absence the audience. It generally felt a little under-powered. As a listener I wanted to feel a little more ‘in’ the action of the music. I just didn’t feel it in this performance.

Not so in the Shostakovich however. Here was a filmed performance where there could have quite easily been an audience present only the director had forgotten to cut to the auditorium. Tight. Heartfelt. When the score demanded attack we had it in spades. And when required, the basses really dug deep and created a special thing. Delicate whispering upper strings in the opening bars, threatening barks from the cellos, and all manner of terrifying screams as and when required. Throughout this was when I had a sense that the LCO were completely engaged – a considerable achievement given the lack of audience.

Worth flagging, I’m not 100% sure whether each work was one complete take. I’ve become a stickler for this. Recorded as live in one take is the sign of bravery and a sign of wanting to recreate something as near to live performance for both performer and audience as possible.

Be sure to take a look at the pre-concert Zoom chat between Sophie Lockett and Jenny Coombes. After what might feel like a slightly awkward beginning, there’s spirit, warmth and insight from their exchanges and responses to livestream questions. Both of them effervescent ambassadors both for the LCO brand and for classical music in general. Love half hour chat about the programme, the experience of playing music together for the first time in a year, and the impact of lockdown and cancelled gigs on the music industry.

Special mention to Christopher Warren-Green whose pieces to camera were informative. Warren-Green’s voice is pleasingly rich. Authoritative and unfussy.