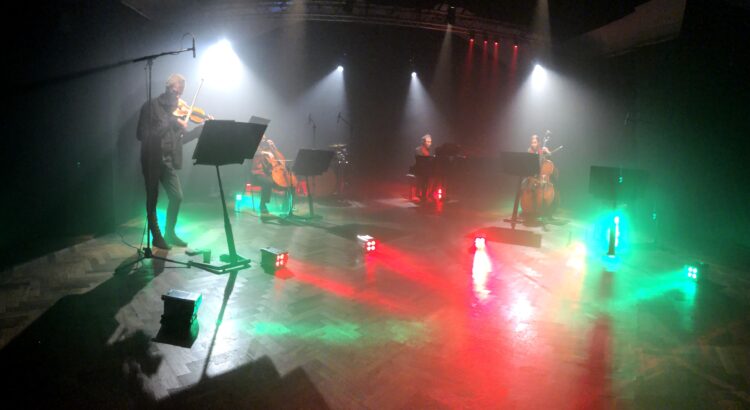 The last time I left London was to see David Le Page and his merry band Orchestra of the Swan record Tartini’s Devil’s Trill.

It was my first trip out for nearly three months. It felt like an expedition heading out on the Greater Anglia to Harlow. Another country. I took my Brompton, perhaps a little naively believing I could easily pedal my way from Harlow Town train station to the community centre where Le Page and the production team filming the eclectic selection of music were holed up for the day.

Harlow seemed – like any other UK destination I imagine – deserted. A town constructed, seemingly waiting for its population. Eery.

Once I’d arrived at my destination, I folded up my bike and hobbled uncomfortably inside. The first time on my bike in months had resulted in an unexpected back injury when I’d reached down to the front wheel to reposition the mudguard. That was at Lewisham. The rest of the afternoon had then looked set to be a rather awkward experience. And, on arrival in Harlow, it appeared it was going to be exactly that.

Inside, the community centre had been taken over by TV-people. People hung around in corridors, masked, earnestly those not already inside the makeshift studio to keep quiet and, importantly, keep your distance.

When a suitable break in proceedings presented itself, me and the lovely Nicky were invited inside. A narrow corridor presented itself inside the doors. Urgent looks exchanged; tiptoe stance adopted. Down the narrow makeshift curtain-lined corridor both us of went before we arrived at what in TV terms would be described as ‘the gallery’ – a small group of socially-distanced dimly-let production staff sat at makeshift tables one keeping a close eye on sound levels, another methodically transferring data from SD card to hard drive.

Nicky and I took up position at the far end, me taking up the prime spot where a gap in the curtain revealed violinist David Le Page. I sat down cautiously, smiling pathetically through my mask in response to the mask. I had come to Harlow to watch through a crack in a curtain one musician perform. This is the cost of COVID. This is the closest I can get to live music.

I pointed out to my chaperone that none of this was a problem. This is the story, after all. This is what rams the point home.

Le Page’s vision, realised in collaboration with the musicians he knows and manifest in The Interpretation of Dreams, is the pinnacle of what can be achieved artistically and technically in the digital medium. Carefully curated storytelling articulated through the curation of an eclectic mix of musical styles and linking prose voiced by an actor. It’s basically Radio 3’s Words and Music but better, and in vision and (assuming you’ve got a Connnected TV) on your TV too. An hour-long TV programme featuring skilled musicians playing a mix of classical and jazz.

It’s taken a pandemic to empower a subsection of the classical music world to create the content they’ve long wanted to see on their screens. And now it is. £10 a ticket. The Interpretation of Dreams is available now.