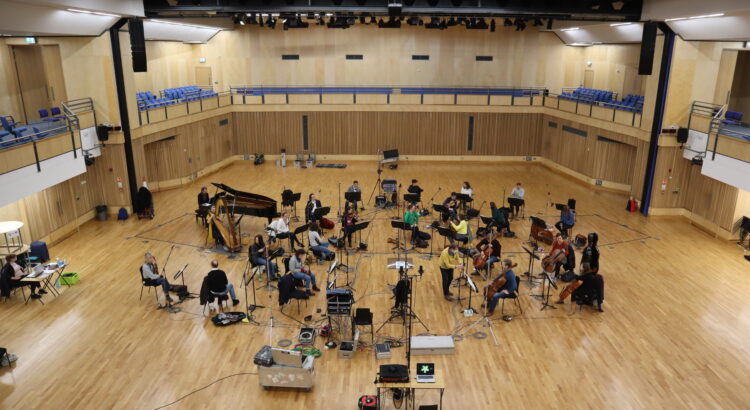 Travelling to Saffron Walden’s concert venue Saffron Hall to hear the Orchestra of the Swan’s recording for their next album Labyrinth, I felt invincible.

JTwenty four hours before I conducted a self-administered COVID test and discovered I was negative. I packed my bag (including flask and sandwiches), and arrived at London Liverpool Street with a good 20 minutes to spare before my train to Audley End. There is a dividend amongst all of this hideousness it seems. I can arrive at places ahead of time and fit and healthy. All it took was a global pandemic and a ravaged economy.

The COVDI testing bit of that rambling introduction is important. Contrary to what I perceived the thought of a COVID test to be – a massive deeply unpleasant ball ache – turned out to be inconsequential. Knowing was better than not knowing. Knowing that others had carried out the test too meant interactions were less awkward. Knowing too at London Bridge Station that Southwark Council were already offering free rapid test results for anyone without symptoms confirmed in my mind en-route that the way out of this and towards a greater sense of freedom was a willingness on the part of all of us to voluntarily submit for testing. If that gives me access quicker to thing I love then I’m bought in.

“Where would you like to sit?” asked the masked orchestral manager after I’d stored my Brompton at the back of the hall and stood gawping at the size of the orchestra. “Up there,” I replied pointing at the balcony.

From my vantage point directly behind the Go Pro I looked down on a small string section, plus flutes, clarinet and harp. In an instant order had been restored. The familiar buzz of a pre-rehearsal band dampened my obsessive worries from the day before. The future may not be discernible yet, but it may not be so grim as I’d been thinking it would be. Why? Because me and the other journalist and the Managing Director were looking down on the thing the three of us cared deeply about.

Excitement levels rose accordingly. You can keep your box sets. I’d far rather spend an afternoon listening to a rehearsal and a recording session.

On the programme for the afternoon, ‘Starburst’ by Jessie Montgomery and, if my attention was maintained, music by Respighi.

It’s a common misconception that an orchestra plays perfectly every time.

Hearing a group of players sight-reading reveals the precariousness of orchestral playing. Music can be (particularly in the case of Montgomery’s effervescent Starbust) messy, especially at the beginning of a rehearsal.

But, in the process of rehearsing, so the miracle of live music making is revealed. Each successive attack of this section or that shows an ever tighter ensemble: a real life demonstration of why live music is such a remarkable thing.

No mean feat in a piece of music where the detail is terrifying.

Montgomery’s scoring holds no prisoners. There’s a driving infectious pulse reminiscent of Dani Howard’s brilliant opening for The Opera Story’s Robin Hood production in Peckham a few years back .Starburst is stuffed full of syncopations. The time signature shifts. And it concludes uneasily. No one player can rely on one another either: violas and clarinet lines (not orchestrated in Montgomery’s original score) are industrious ; upper strings take flight and soar from time to time (when they’re not required to be ‘argumentative’); piano and harp accentuate. It’s intense concise writing that triggers the heart rate, creating a technicolour spectacle.

In this way the musicians have to be on their mettle. The conductor too has to be patient. And everyone needs to anticipate the acoustic and compensate for the distance they’re still having to sit apart from one another.

Montgomery’s music shines come the end of the rehearsal and takes. Starbust is an exciting opening track for an eclectic range of musical styles on Orchestra of the Swan’s new album out in November 2021 which also includes music by Britten, Purcell, Nico Muhly, Thomas Newman, Peter Maxwell Davies and Joy Division.. This, like Timelapse released earlier this year which has now secured two million streams, solidifies Orchestra of the Swan’s reputation for creating rich musical experiences for a wide range of audiences with ‘mixtapes’, genre-melding playlists that reach further than the conventional concert-going crowd.

Talking to MD Debbie Jagla during the break, it’s easy to see why Orchestra of the Swan is able to capitalise on this moment.

They’re a small team. Artistic vision from leader David Le Page, powered by a can-do managing director, aided and abetted by a former player orchestral manager, documented by a nimble digital capture team who understand the impact of visual storytelling and can armed with high-end mobile kit. This isn’t a story of COVID forcing a pivot in Swan’s activities. Rather, it’s two years pre-COVID experimentation with concert formats readying the brand for the moment when recordings in controlled environments became the order of the day.

“Digital isn’t compensating for live, it’s helping raise awareness,” explains Debbie to me during the break. Quietly, inside I’m cheering. I had thought I was the only one who thought this about the COVID era. But it’s a risk – costs are covered by the band (supported by Culture Recovery Funding) with no real sense whether they’ll be recouped by sales. Streaming figures from their Timelapse album now totalling 2million are likely to bring in around about $1000. That makes this a marketing project. But given that they’re reaching more people than they did with ‘live only’, increased reach is worth the spend.

Later after the tea break, the back row of the band shifts around a bit to accommodate an oboist. We hear The Dove from Respighi’s The Birds. A warm rounded oboe solo emanates from the back of the hall and takes those of us on the balcony momentarily by surprise.

Such experiences can only happen in a physical space – a musician taking hold of the music in front of them and bringing their own voice into the space and gently commanding your attention.

The Respighi doesn’t demand the time and attention Jessie Montgomery’s more complex piece does. But my focus remains fixed.

Something in the back of my mind links up with a thought: that person far away in the distance looks oddly familiar.

I grab my camera, attach my zoom lens and focus. Yes. It’s Victoria Brawn. An oboist I used to boom for a training orchestra in Aldeburgh in 1996. Memories flood back with the creeping realisation that I’ve nor been in her company for 25 years. And here she is now. Doing what she did then.

After the Respighi takes, me and Victoria talk briefly outside.

She comments how Aldeburgh still seems like yesterday. I bang on about hearing news about her teenage children makes me feel old. She also remarks on how these opportunities (her last concert was in November 2020) are “very precious”. It turns out that the after effects of an infection meant there was a chance she would have to find someone to cover her first paid gig in months. I’m relieved she didn’t have to.

Classical – whatever the format or content – is more than entertainment. There is art to be found in curated eclecticism. And community too.

It has been hugely uplifting to be in the company of music makers today – spirited people doing different things but drawing on the same passion I’ve benefited from over the past twenty five years. Proof of a vaccine or a negative COVID test seems like a small price to pay (assuming the latter is free at the point of delivery). Orchestra of the Swan’s Labyrinth is scheduled for release in November 2021. Too long to wait.

Orchestra of the Swan’s Timelapse 2.0 Digital Concert is available from 8pm on Monday 19 April 2021 and includes music by Bach, Grieg, Nyman, and Rameau.