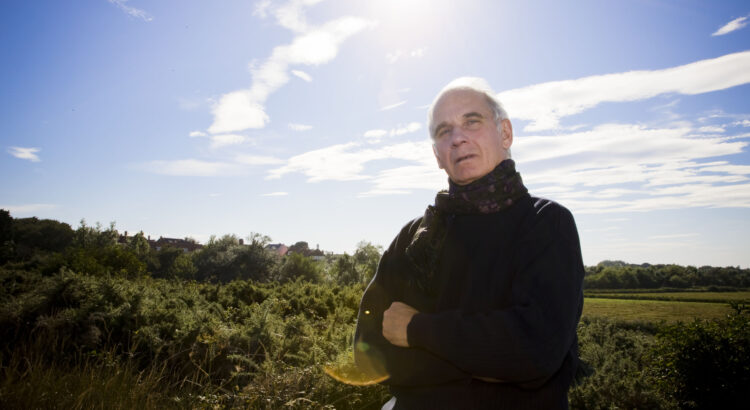 News announced today that conductor Steuart Bedford has died at the age of 81.

Those outside of classical music won’t necessarily recognise the name. Those without a connection to East Suffolk may not recognise it either. But for those whom Aldeburgh holds a special place in their hearts because of the music, the composer who put the town on the map and the various musicians who gravitated to the place and were inspired by it, Steuart Bedford is synonymous with the place like Oliver Knussen, Peter Pears and Benjamin Britten himself.

My memory of Bedford is vague. I remember him being a presence in the narrow corridors of the Festival Office on Aldeburgh High Street – part pseudo-administrator, part-celebrity – striding into General Manager’s Sheila Colvin’s office with purpose and resolve.

Personally, I can’t quite remember for sure which productions he conducted I worked on with Britten-Pears. I’m fairly confident that my connection with him was when I worked on the Britten-Pears School’s production of Albert Herring in Aldeburgh’s Jubilee Hall back in 1997 as orchestral manager and production runner.

I remember feeling awkward in Bedford’s company. Bedford was affable and accommodating. Very matter of fact. But as a relatively young arts professional, I often felt like his knowledge, experience and his position in Britten history gave him an otherworldly aura. Those of us not doing the singing or the playing felt distinctly lacking. His authority and eccentricity fed into an evocative sense of history that smelt of stripped pine and was underpinned by the sound of reed beds wafting in the wind. Even twenty years after Britten’s death Bedford’s presence in and around Snape Maltings seemed to make Britten a still tangible force in the locale. That created a sense of mystique in both him, Britten, and Aldeburgh.

One interaction particularly comes to mind during the production of Albert Herring.

In anticipation of transferring the small production from Snape’s rehearsal to Aldeburgh’s Jubilee Hall, an early recce revealed the need to expose the lesser-used orchestra pit built under the stage. This was a considerable undertaking in itself uncovering a much deeper pit (approximately 8 feet) than any of us had anticipated in the planning stage.

“Well that’s just ridiculous,” he cried out, standing in the bottom of the pit looking up, “I can’t even see the edge of the stage let alone anyone on it.”

I remember this seemingly innocuous retort as being a signal for even more incoming stress necessary in order to bring the production to life. Looking back, I think his eccentricities were more a manifestation of how at ease he was with himself, an expression of his quickness and focus. Why waste time talking around a subject when what’s necessary is getting straight to the point? A lesson for us all there.

Perhaps that unease was also down to the times we worked together. Now I come think more about it, I’m reminded of the first concert series we produced – a recording for Classic FM of an outdoor concert an Minster Court repeated the following day at the Chinese Embassy near Portland Place.

Both were strange concerts arranged by a development director who really should have known better, both events staged in demanding locations. The first outdoors where the wind blew strong and the sound didn’t carry, the second in a function room where the parquet flooring was so polished and the grand piano so lacking in usable brakes, that whenever the soloist played a fortissimo chord the instrument veered off in the direction of Bedford’s podium. Maybe what all of this is saying is more about me than it is about him.

When I returned to Aldeburgh for the epic ‘Grimes on the Beach’ which Bedford had conducted with the Britten-Pears Orchestra in Britten’s centenary year, it felt like returning home to see a familiar much-loved face. Bedford had by that time become so embedded in both the landscape and in my personal history as to make returning ‘home’ something akin to returning to a school for a trip down memory lane.