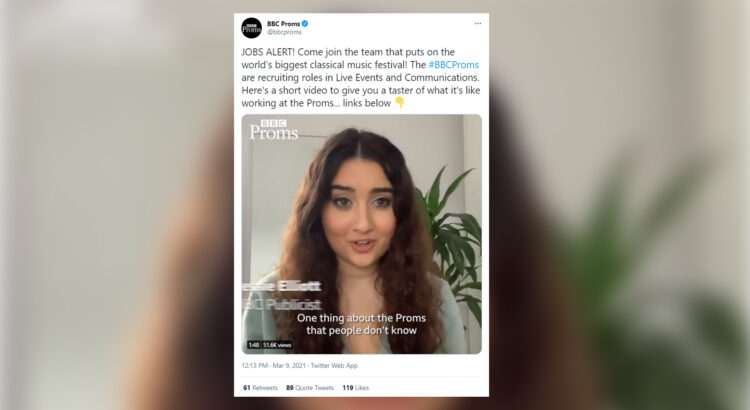 The BBC Proms recruitment advert has come in for a bit of stick over the past few days. And during the Association of British Orchestras conference this week there was a question which was bound to be asked by delegates: was the BBC Proms really apologising for classical music? Was it embarrassed about classical music?

For context, the video – a message seeking to recruit young seasonal comms professionals to support to production of this year’s Proms season – spotlit two existing comms staff talking about the range of events in the season. The video led with a reference to classical music in the context of “its not all Mozart and Beethoven” before pulling in clips from crossover, pop, and world music themed evenings. The video also sought to demonstrate the BBC’s values regarding diversity and inclusion.

Some have interpreted the comparative lack of classical music illustrations and the opening line of the video as the BBC Proms apologising for classical music.

BBC Radio 3 Controller Alan Davey was asked about the advert at the ABO conference.

“This advert was about appealing to a a wider range of people who might normally think about applying for jobs at the Proms. There are seasonal jobs there. Every year, we want to put a plea to as wide an audience as possible.

“The advert is not saying classical music is dull, embarrassing or only for old people. What is says is that the BBC Proms is more than more than you think. When we do things like the Ibiza evening, you get an audience who’ve never heard an orchestra before. Then they want to hear an orchestra again.”

And you know, that that’s what we do. never apologize for classical music. Classical music is bloody marvellous.”

As someone who is familiar with the way in which different types of content are produced and by whom at the BBC, I am happy to throw my weight behind this.

First, the advert has understandably triggered emotions. Those who love the genre (I count myself as one of those) often rail against the seemingly willful mis-representation of the music. Celebrating and advocating the genre has to be done in an inclusive, authentic and respectful way that connects with core listeners and newcomers. That is no easy feat. More people get it wrong than get it right.

I worked in corporate communications producing digital content for a range of different BBC ‘brands’.

Corporate messaging needed to fit broad goals by articulating organisational values. Corporate messaging was produced by a different production team who would be working to a different editorial brief, targetting a different audience with different goals. Recruitment videos (the kind of content which would have been hosted on the BBC’s Careers website ten years ago) would be produced by the corporate comms team who saw the goal as encouraging recruitment and driving applicants. Recruitment content is different from consumer content. I’m a consumer of the BBC Proms, I’m not someone who wants to work for it (I did once, but that’s another story.)

There are plenty of media and arts organisations who actively seek out applicants who assume they either know nothing about classical music, or who actively don’t. The thinking being that these individuals bring a fresh perspective to storytelling, and help challenge conventional thinking which might be embedded. The recruitment of such individuals is not an articulation of how the individual brand sees itself in relation to its current audience, more a manifestation of the wider organisation’s core values. Corporate communications storytellers would understand that as the driving force of the content.

The problem has occurred because a piece of recruitment has been placed on a channel that is perceived as consumer facing, when the content really should have been placed where the sought-after applicants currently occupying their time in the social sphere.

Neither the advert nor the error is a sign that classical music is being apologised for. Its a demonstration that people are looking beyond the bubble to gain much-needed perspectives so that they can reach out to untapped audiences.