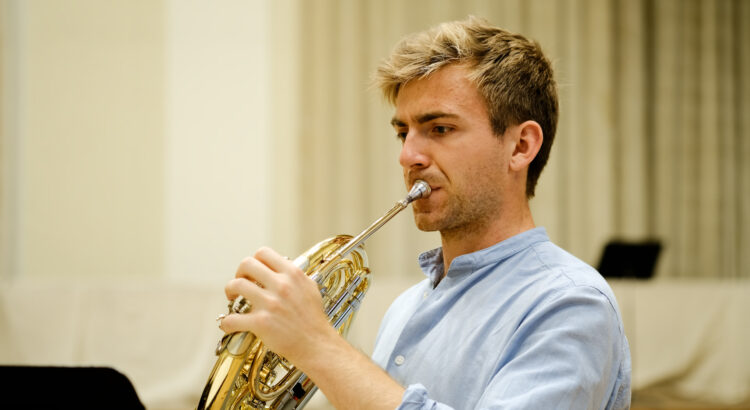 Horn player Ben Goldscheider has a remarkable CV for someone who came to prominence back in 2016 following his BBC Young Musician Concerto Final in 2016.

Solo appearances followed with the BBC Concert, BBC Symphony, Aurora, English Chamber, and and Manchester Camerata. He’s been guest principal for West Eastern Divan, English Chamber and Philharmonia. Last year he featured in a recording of Mark Simpson’s Geysir and Mozart’s Gran Partita. This year he records as soloist with Philharmonia and appears at Wigmore Hall. He’s 23.

The release of Godscheider’s musical tribute to much-loved musician Dennis Brain whose centennial the music world is marking at the moment is a homage to the legendary horn player who died at 36 in 1956 in a car crash.

Brain is celebrated for the quality of his sound which even in a mono recording like Strauss’ first horn concerto with the Philharmonia from 1947 is something to marvel at – a long elegant self-assured melodic line that reassures with every caress. The opening subject of the first movement evokes a powerful image – a column of air that starts in the pit of the abdomen and weaves its way across a wide vista with grace.

That so many composers in Brain’s early career were interested in the horn player’s playing is reflected in the music written for him by the likes of Hindemith, Benjamin Britten and Gordon Jacob. “Dennis Brain has often been heralded as awakening the horn from a long slumber,” said Ben Goldscheider in the release for the album, “such was the comparative barrenness of the Romantic period in terms of compositions for a solo horn player.”

The album ‘Legacy’ consists of music for Brain (it surprised me that Poulenc wrote for Brain), and that written in memory of him, the most arresting of which on a first listen for me at least is Huw Watkins Lament.

Lament is a ravishing creation, taut and efficient, charting a journey through a range of emotional statements punctuated with anguished leaps. Music with humanity that has the power to console. It’s rare that new music I’m invited to write about prompts so many listens as this has this week. It’s music that makes me want to explore Huw Watkins other output further. Some achievement.

Listening to Roxanna Panufnik’s Sonnets without Words during Ben’s Facebook premiere launching the album on Friday night, the sound of her rich array of harmonies made me think of her Love Abide album on Signum featuring Voces 8 (a release that triggered a revealing interview with Roxanna for the Thoroughly Good Classical Music Podcast back in 2019).

“Panufnik speaks when she’s writing for the human voice,” I said to The OH (it sounded less pretentious than it reads) as we watched Goldscheider play Sonnets.

Reading the booklet now at the time of writing this post I now understand that Sonnets started as a work for voice and piano.

That her transcription for horn and piano makes me think that when listening to Goldscheider’s recording helps me appreciate more what Roxanna’s compositional language is. Sweet Love Remember’d has an absorbing theatrical air about it.

The other striking thing about this album is Goldscheider’s playing. In Watkin’s Lament and Mine Eye from Roxanna Panufnik, there’s a fragility to the vibrato that creates jeopardy to the listening experience. The sincerity in the voice creates a persona that mixes self-assurance and vulnerability. Utterly fascinating.

In posting this I want to call out the video production and PR for Ben’s album release. If you’re looking to encourage people to listen, think, reflect, and advocate the material then sharing a range of supporting material off the bat is bottom line stuff. Artists looking to maximise reach must understand why it’s important to engage with video, image, and copy production. Without that supporting material advocating new work is made more challenging. Goldscheider’s team has done textbook work.