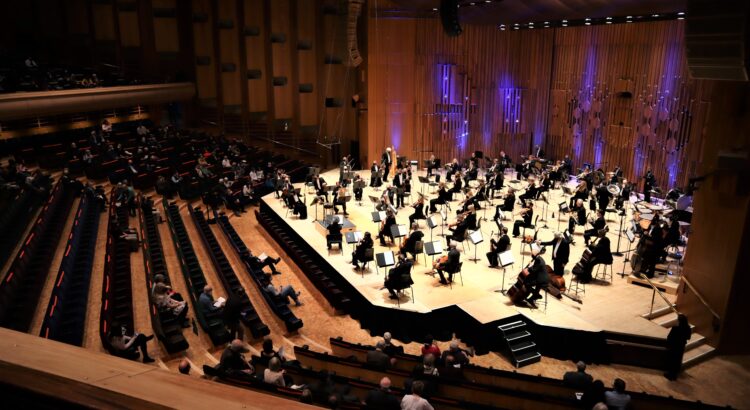 “Welcome back to Barbican” said the man on stage; the audience reacted with customary and extended applause. Had the London Symphony Orchestra have called the concert off there and then, the sound of the applause would have been sufficient. The sound was warm, joyous and excitable. Everyone united. Everyone brimming with anticipation. Quite a special moment to be a part of. “We’re all very excited and very emotional,” said Rattle referring to the orchestra behind him.

On the face of it, writing notes about a concert only a small group of people have attended seemed a rather quaint idea. Mildly outdated. Pointless. But then this was an important moment – the London Symphony Orchestra’s first public concert in the Barbican for fourteen months. Highly charged. Capturing the moment you hear a particular orchestra in a particular venue after so long is something to document, like hearing an orchestra for the time (very nearly).

In the opening theme of Britten’s Young Person’s Guide to the Orchestra the upper strings sounded rich and warm on the G-string. The cello variation was gratifyingly tender, and the clarinet duet was comically playful. I heard a sonorous oboe solo over which neither player nor conductor saw any need to rush (much to my delight). And somewhere between that and the uplifting fugue at the end, the unmistakable sound of a mobile phone. Nobody tutted. Nobody sighed.

Throughout I was surprised about how cohesive the ensemble sound was. There was precision and detail (particularly given the phenomenally challenging speed changes during Dvorak’s mammoth Slavonic Dances. Not only was the togetherness of the sound seemingly incredible given the distances the players were from one another, but the rounded sound especially between the flutes, clarinet, and oboe at the ends of phrases were a ravishing treat – like a perfectly wrapped present topped with neatly tied bow.

Front of house management in the 80s interior of the brutalist Barbican had a whiff of the airport about it. Ticket holders queued outside, checked in using the NHS Test and Trace app, filed in line to a roped off part of the foyer before heading into the auditorium, from street to seat in around 10 minutes. One presumes it won’t always be like this. But for the time being at least, this is good enough, because the reality is that it is so good to be back. So very good to be a part of the live music experience.