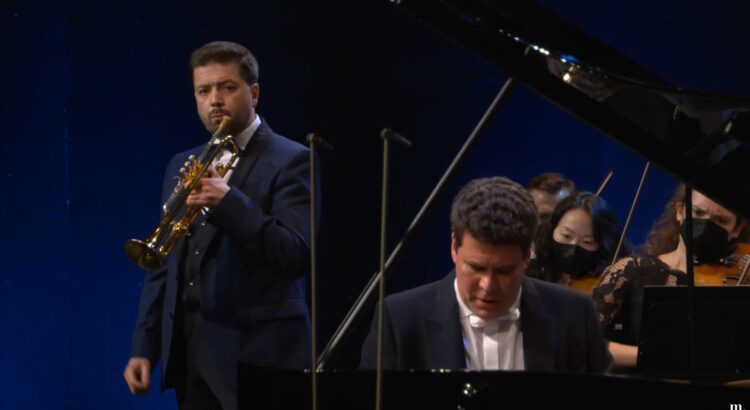 Verbier whose video-on-demand service (via Medici.TV) is making all of the Festival available online for the 15th year, have a distinct advantage over other streaming platforms and arts organisations, capitalising this year on many years of technical and creative live-streaming experience.

This year’s opening concert from the Salle des Combins in Verbier produced by Idéale Audience was directed by Grammy Award-winning Jean-Pierre Loisil, had a far more intimate feel in terms of visual direction making more creative use of the myriad of the remote-controlled cameras that are dotted around the concert venue. In addition, the all-black TV studio interior of the auditorium created a highly focussed viewing experience too.

It may seem odd to start with the video production for a live stream concert, but it was this which was most immediate. After a year of live streams and YouTube Premieres of varying quality, this stream and its rich and detailed sound mix was a highly engaging watch, putting Verbier’s consistent and defining characteristic front and centre: the high calibre of performance.

The non-distanced orchestra and soloists play with such energy and attack in this performance, a reminder of what is lost with distanced playing. Contrast the fast-paced detailed articulation in the upper strings in the first movement with the delicate precision of the pianissimos in the final bars of the second movement. The string sequence at the beginning of the third movement has a depth to it I feel like I can almost touch as I listen.

The electricity is in full flow during the Prokofiev symphony. Lots of detail in individual lines – listen out for the break-neck articulation demanded in the woodwind throughout the four movement, and (my particular favourite) the seeming throwaway phrase in the violas. Elsewhere in the last movement, the upper strings are at their most fierce.

Perhaps finding this such an exhilerating watch shouldn’t really be quite as surprising as it is. The VFCO is made up of former members of Verbier’s training orchestra the Verbier Festival Orchestra – players who have gone on to perform with an impressive roster of the world’s most distinguished conductors and soloists.