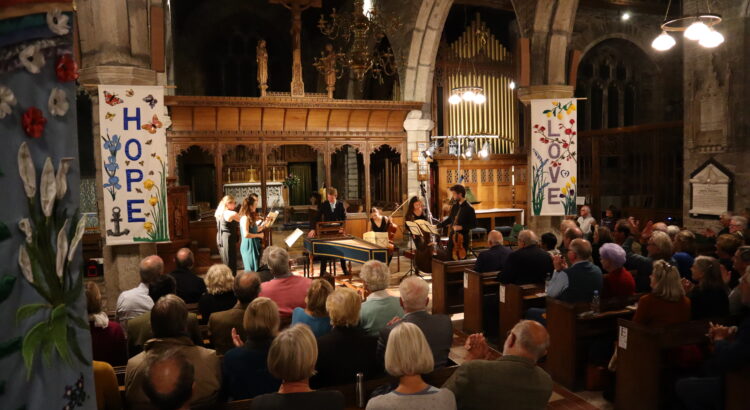 The best time to write about a Festival trip is a day or two after you return, I find.

Writing about my experiences on a trip during the journey home is too early. The day I return home is about unpacking and decompressing. The day after however, I’m usually starting to pine.

It’s at this magical moment in time that recent experiences have crystallised into lasting memories. These memories become inextricably linked with the names of performers and the music they played. Timing your first draft is therefore paramount.

I visited the first weekend of the two-weekend Two Moors Festival (1-10 October 2021), attending seven concerts in just over 48 hours, hearing solo piano, string quartets, vocal groups and percussion and electronics. All this within a twenty-mile radius accessible only by car or, if you’re a cyclist as unconcerned by the many gradients as by the changeable autumn weather.

Dartmoor is (how I imagine Exmoor will be for the second weekend in the Two Moors Festival) a world apart from the urban experience. The roads are narrow, the phone signal patchy-to-non-existent, and the silence when the final chord dies away deafening. All this and the need to adopt a snail’s pace speed at all times means there’s time to clock a great many chocolate box and breathtakingly idyllic views around every corner.

Little wonder I ended up feeling a little sad to heading home to London on Monday morning.

‘Arcadia Unlocked’ is the title given to the Two Moors Festival this year. The twenty-year-old festival based in Dartmoor and Exmoor has this year built its events around two weekends in October (rather than the usual week-long consecutive run).

This is a good move, making it easier for people like me to visit, capture and reflect on the spirit of the thing, throwing forward to a further opportunity for people to attend. The festival’s second weekend runs from Friday 8 – Sunday 10 October.

Two Moors Festival artistic director and violinist Tamsin Waley-Cohen has seized upon both Dartmoor and Exmoor’s key selling-point and weaved this into an editorial strategy that capitalises on the moment by appealing to an audience drained by the unreality of our collective experience fuelled by COVID and Brexit.

While the media tells the story of the state cack-handedly implementing its own self-destruct strategy, Waley-Cohen has in the programme for Two Moors encourage concert-goers to consider something infinitely more real, more compelling, and more potent to soothe the soul and recalibrate our senses.

The strong theme that weaves its way throughout the entire Festival is the natural world around us. Not only as depicted in music, but reinforced with simple, immediate and relevant talks that celebrate the location and generate thinking. I wouldn’t have sought out a talk about birdsong, for example, nor picked out a book on a bookshelf on the subject.

And yet, attending Tom Whitehead’s fascinating explanation of why birds sing, how they sing, and what birds you can hear singing in the Dartmoor area set me up well for George Fu’s exhilarating hour-long concert of music by Messiaen and his tantalising transcriptions of Respighi’s The Birds.

I didn’t sit listening critiquing performance, rather thinking further on the questions the talks and the landscape had raised in me. That’s evidence of instinctive festival programming. The Two Moors Festival have found in Tamsin Waley-Cohen a valuable talent.

Pianist Cordelia Williams shone on the first night bringing part of her recent SOMM recording ‘Nightlight’ to Widecombe-in-the-Moor including a mix of unsettling Scriabin, Schumann and Schubert, in addition to Bill Evans reassuring ‘Peace piece’. It was the first time I’d heard the 2006 BBC Young Musician piano final winner play live – a musician who brings consistency to the keyboard that inspires in me as a listener a sense of strength. No pizazz, only love.

This may well have had something to do with the intimate setting Cordelia’s concert (and that of the other performers were set in). All of the church venues were warm supportive acoustics attended by a focussed, welcoming and appreciative audience. No airs and graces here, only appetites in need of sating. These settings make for a more immediate style of communication that brings the music alive in a way that ‘conventional’ concert settings don’t.

Similarly so the Barbican Quartet’s performance of Haydn’s Sunrise and Schubert’s String Quartet No. 15 in G major. This was the first time I’d heard the work. Simmering with unexpected textures and unsettling shifts between major and minor, it made for an intense afternoon listen.

The Barbican Quartet, bassist Thea Sandy, and harpsichord player Nathaniel Mander joined Tamsin Waley-Cohen after an epic Bach Partita No. 2, for a spirited performance of Vivaldi’s Four Seasons proving the work is only as grey as the soloist and director allows it to be. No languid sentimentality here – only the kind of energy you’re likely to experience exposed to the elements on a moor.

Hats off to Stile Antico who wrapped up the weekend with a mixture of heavenly and earthly vocal delights – a series of short songs set for a variety of different vocal combinations. In the exposed dry acoustic of St John the Baptist the twelve-voice ensemble showed their brilliance, vocal lines combining to trigger emotional responses in me in the moment I wasn’t quite expecting.

But the performer who gets the big thumbs up is percussionist Joby Burgess whose exploration of ‘Waste and Renewal’ in Toru Takemitsu’s Seasons, Linda Buckley’s Ektosis, and John Luther Adams ear-splitting ‘Qilyuan’ for bass drum and support live electronic loops had me gripped from beginning to end.

Not forgetting Rebecca Dale’s aptly ‘Can’t Sleep’ for vibraphone – a musical evocation of the brain’s unfailing ability to maintain a high level of activity just at the moment in time when you want to go to sleep. A timely reminder of the damage our present-day world can do just at the moment in time we need to switch off and recuperate. Not something I struggled with in the relative calm of Dartmoor, and a personal goal to strive for now that I’m back home in smelly old London.

The Two Moors Festival continues Friday 8-10 October 2021. If tickets are still available and you can get yourself a hotel room in and around Exmoor you’ll not be disappointed with musical offerings from pianist Pavel Kolesnikov, Huw Watkins, Nicky Spence and Laurence Power.