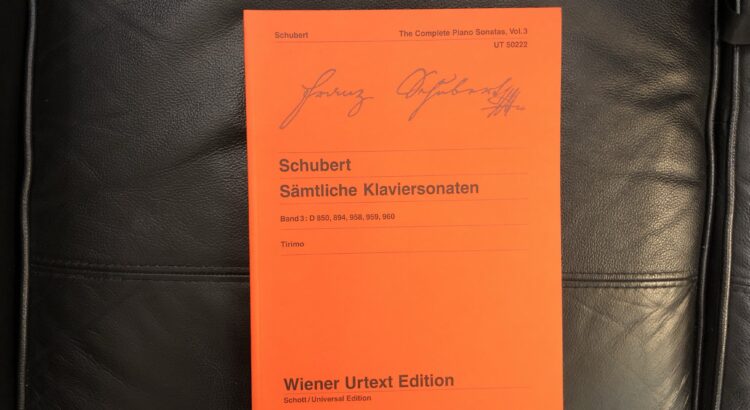 Evidence. Late Saturday afternoon, me and Simon are watching a three-part documentary on Hitlers last year (available via Disney+). The credits roll, I turn to see my 20 year old cat Faero lick at the bowl of water on his cushion in front of me, after which he starts shaking uncontrollably. Simon holds our ageing puss at the same time as looking at me in a way that signals to me: this is the moment.

One hour later I’m at the vets looking at a piece of paper with mine and Faero’s name on it. “You mean I have to make this decision?” I burble at the vet. “I thought at least you made a recommendation.”

Faeroe is the last of two brothers to be put down and I’ve felt ridiculously stupid and childish going through the process. But, Simon and I have remained courageous, flagging to one another those moments when the familiar habitual thoughts bring about painful feelings.

I capitulated. I made the tea.

And whilst I drank it, I watched Pavel’s Schubert in G minor D894 from Wigmore Hall on YouTube.

How utterly wonderful it is, I think to myself, that something that brought so much joy a few nights ago can bring a much needed injection of joy now.

How wrong the would-be iconoclasts are about Wigmore’s innate understanding about the music that means I can sit here at 9.15am sobbing about the departure of a trusted pal of twenty years and feel reassured, supported, and possibly even empowered.

Digital doesn’t mean reinventing the wheel. Digital needs to work harder at telling the story of the joy of music: listening.

Minutes after the stream starts up on the TV I message trusted pal Fran. “Do you suppose that as a returning pianist,” I ask her, “I could play the Schubert Pavel played?”

“I was hoping you might want to learn it.”

Later on today I end up going to Great Marlborough Street where I’m told by Fran I can find a copy of Schubert’s D894. When I step through the front door I gasp at the shelves packed full of scores. It’s ten, maybe twenty years, since I’ve been in a music shop to buy music.

Uncharacteristically I don’t hesitate about the price, after having checked with Fran’s message whether I’m getting the right publication. I opt for Wiener Urtext: there are more sonatas in it – more opportunities in the future.

My purchase comes in a colourful bag. Sonewhere in the background – from the practise rooms in the basement – I hear Rachmaninov’s music, and the first part from a piano duet I recall playing with an old school friend forty years ago.

“You have the best job, being surrounded with all this music,” I say to the woman behind the till. “We like think so.”