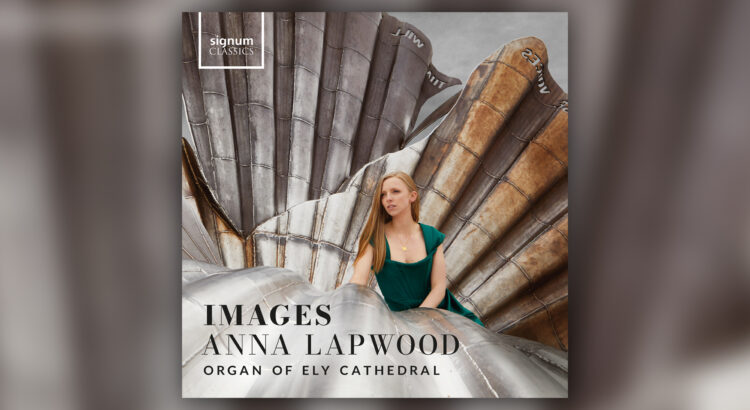 Organist, composer, and conductor Anna Lapwood’s second release on Signum features music by Messiaen, Ravel, and Britten amongst others and coincides with her appearance both at the Proms as a performer and as a TV presenter. A savvy move that underlines the considerable influence she has for the next generation of musicians in this country.

More than this, the album Images recorded at Ely Cathedral in January of this year, further enhances the message her first album – All Things Are Quite Silent – clearly communicated. The multi-talented Anna Lapwood has a great many creative avenues she could follow in the future, which means a considerable range of musical experiences for the rest of us to enjoy in the years to come.

Signum Classics has picked out three key tracks for pre-release.

Messiaen’s Vocalise-Etude was written in 1935 when the composer was 27. Technicolour chords support a wandering melody that lulls, caresses, and consoles in a tightly composed four or so minutes of bliss. Keep an ear out for the luscious cascading chords that appear towards the middle and the end, the latter iteration decorated with the tiniest distant upward series of chords giving the entire piece a delicate music box feel.

An illustration of Lapwood’s thorough musicianship is evident in the second pre-release track, the ‘Forlane‘ from Ravel’s ‘Le Tombeau de Couperin‘. Organist Erwin Wiersinga’s transcription of the original piano solo gives the piece (and the work as a whole) a new profile as something that could have just as easily been written for the organ. Importantly, it’s in Anna Lapwood’s choice of stops which create something really quite magical.

The third pre-release points to the spotlight work – Storm from Britten’s Four Sea Interludes. The Four Sea Interludes are for any Britten fan (or anyone who’s spent time on Aldeburgh feeling the North Sea wind in their hair) highly evocative sounds. That emotional connection was felt most keenly during the first phase of lockdown (or maybe it was the second, I can’t quite remember now) when Anna was posting video clips from the arrangements she was making on her own church organ throughout 2020. At the time they seemed like the perfect antidote to the preponderance of multi-shot lockdown videos distributed across the internet. That they were then subsequently released as a complete set for cathedral organ makes the album itself much-anticipated.

The arrangements of something so familiar and so personally felt to the listener isn’t something embarked upon lightly. Done ‘wrong’ and cries of ‘It’s not good as the orchestral original’ would surely follow.

‘Dawn’ puts pay to any chances of that with an exquisite setting that uses both instrument and the acoustics of Ely Cathedral to create an epic piece of Gothic theatre. The addition of tubular bells (as originally scored) in Sunday Morning evokes the never-ending North Sea horizon.    The final movement ‘Storm’ is especially good, Lapwood’s arrangement exposing so much more of the detail in Britten’s original writing – the final ‘crashed’ chord closing the movement a particularly good example.

Like Anna, Gesualdo Six’s Owain Park is quickly establishing himself as a multi-talented musician, concert promoter (and content producer). Perhaps in years to come both of them will be seen as examples of what musicians need to be thinking about as content creators across multiple platforms. On this album, Park provides the title track, “a creative and powerful exploration of the many tonal possibilities of the English organ” inspired by words by Walt Whitman. The seven-minute piece is a dramatic piece of musical storytelling full of contrasting colours and textures that are both intriguing enough to trigger the curious and sufficiently familiar in terms of musical language to delight the listener.

Calling on Owain Park for new music is benefitting not only Anna Lapwood but also the musical genre as a whole. New music can be original, unexpected, and compelling all in one, without pushing people away.

That same musical awareness was evident on ‘All Things Are Quite Silent’ where the inclusion of Kerensa Briggs ravishing Media Vita, made Lapwood a curator of the present day musical talent. Briggs makes another appearance on Images with ‘Light In Darkness’, a piece commissioned by Choir & Organ Magazine and St Andrew’s University Organ Week, demonstrating the composer’s love of creeping chord progressions and the gentle melee that ensues in large cavernous spaces.

Like Owain Park’s writing, Cheryl Frances-Hoad’s Taking Your Leave has that same adept understanding of how to make something new within a familiar frame of reference, contrasting exquisite delicacy with bone-rattling chords in a work I will be insisting is played at my own funeral, assuming I can guarantee a booking for both Ely Cathedral and Anna Lapwood.