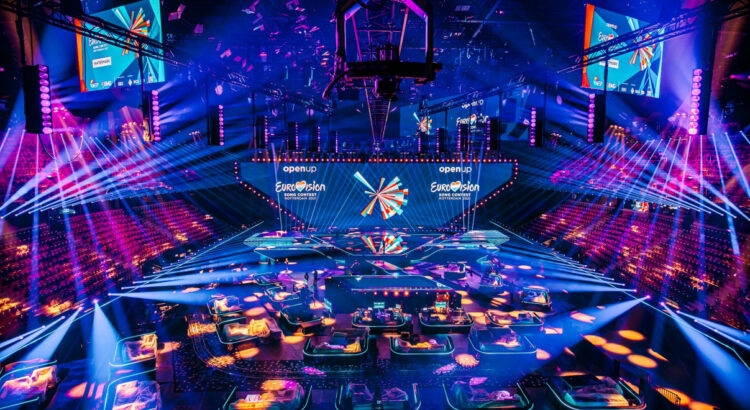 Eurovision this year is different: a much smaller audience, distant from the stage. During the two semi-finals broadcast on TV earlier this week, we’ve seen a 3500 strong audience in various shots, significantly smaller and quieter than in previous contests.

On the wide expansive stage below performers (only the lead vocals need to be sung live this year) sing to an arena populated by other artists and their production teams. In the cavernous space, the atmosphere is lost in comparison to the EBU-approved ticketed mosh-pit visuals that were part and parcel of previous Eurovisions. This not only places greater demands on the performer but means viewers at home see an entirely different kind of atmosphere, contrived perhaps even sterile.

The story the audience creates at a live experience is potent, both for those present and those of us watching at home. Eurovision is an aspirational event, something that its eager audience of fans and commentators help amplify the profile of. Eurovision’s renaissance since 2000 is in no small way down to capitalising on the enthusiasms of its most passionate audience members. That audience has over the years first validated, celebrated and advocated the Eurovision brand. The Eurovision audience is an integral part to the experience, and over the years their proximity to performers especailly important too.

The irony is that this year’s Eurovision is sort of what the Contest used to be when I first watched it as a kid. The audience was small and distant from the stage. But there was still an aspirational air about proceedings when I watched. It triggered the imagination. This was an event that was going on someplace else. What happened after the TV credits rolled was as potent as the event itself.

Staging Eurovision is an achievement on the part of the EBU and the Dutch broadcaster AVROTROS, not least because the revenue derived from it is surely depleted given the restricted lifestyle most people are experiencing at the present time. It also helps science and, like the Brits in the UK, it helps a country’s government and a global record industry who astutely recognise that a return to live events is vital for their revenue stream and their artists’ earnings.

My visits to Bath Abbey, the Barbican, and Wigmore Hall this week have contributed to this thought process, and remind me of another story not currently being made the most of at the moment: the contribution the other people present make.

This is a valuable currency not being reflected anywhere near enough. Entertainment regards and reflects the audience as a passive observer instead of an active contributor to an experience.

The audience – your customers – create the experience that other potential audience members will willingly pay to be part of. I know because I have in the past.