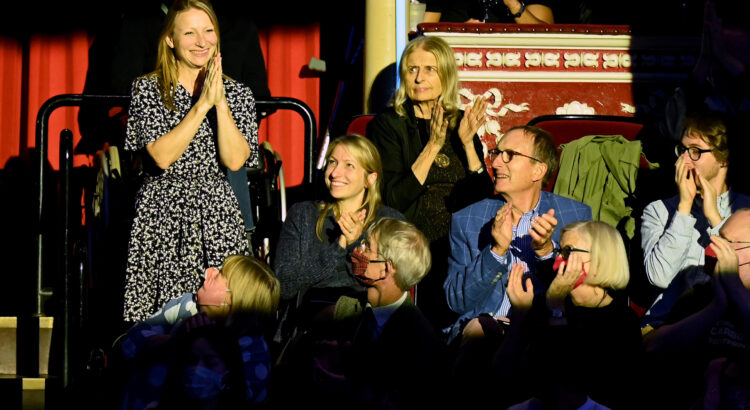 ‘Where Icebergs Dance Away’ (given its UK premiere by the BBC Scottish Symphony Orchestra at the BBC Proms 2021), is an evocative meditation on climate change, inspired by a trip to Iceland’s Disko Bay where according to the composer, the icebergs appeared to ‘dance’.

Although the pre-performance introduction made clear that the piece wasn’t a literal depiction, Charlotte Bray’s trademark musical language created a haunting atmosphere with an uneasy stillness. Repeated deep bass notes ushered in spread chords across the orchestra which seemed to momentarily suspend time. In the opening section, towering shapes were sketched out, with high decorative woodwind phrases giving just enough detail for jagged edges.

An up-tempo middle section consisting of agitated phrases tossed around the orchestra provided an unexpected drive. There was a hint of a rhythmic pattern that might be developed towards the end of the middle section, but the opening material returns just before that sense of development can bed in. When the original idea returned it seemed to take on a slightly different feel – what was first unsettling is now reassuring, elegant, and beautiful. The image dissappears into the mist as the music fades away.

Its highly efficient writing and scoring means this surprisingly short piece that leaves me wanting more. A good thing then that Charlotte is working this into a larger piece for future performance.

That’s something to look forward to because Charlotte Bray’s musical language works really well with large-scale forces. The combination of pitch extremes (for example here in the basses and the violins) creates vistas in which epic drama waits to be played out. At the Speed of Stillness from 2011/12 is a highly recommended listen. Frenetic, urgent rhythmic patterns contrasted with brief moments of quiet. Also on the same album, Fire Burning in Snow (Moonshot) with Lucy Schaufer shows how really quite sparse writing for a handful of instruments can yield similar vivid imagery.

Listen to ‘Where Icebergs Dance Away’ via BBC Sounds

If one was to do some as seemingly pointless as rank classical music awards ceremonies for their usefulness, their print, the range and availability of food and drink, the speed of cloakroom facilities, or the slickness of the actual event, then the BASCAs (now renamed the Ivors Composer Awards) would come out on top for me.

What the Ivors also have over some of the others on the circuit is an element of usefulness. It’s a platform for the individuals who play a crucial part in the creative process but who often go overlooked save for a credit in a programme. In this way composers can sometimes be the faceless wonders, making identification at composer awards a tricky business to anyone who isn’t a publisher or another composer.

In the presence of people to be grateful for

Note my surprise and excitement then when I discovered that composer Edward Gregson not only won the award he was nominated in the Amateur or Young Performers category for ‘The Salamander and The Moonraker’, but was also sat in the row in front of me. Here, a man responsible for music in my formative County Youth and university music-making days that brought a smile to my face.

Similarly, a cursory glance of the judges page in the programme revealed that another wind band and TV composer hero of mine – Nigel Hess – was also present. I didn’t get to meet them but felt the undeniable buzz when i discovered I was in the same room as creatives who had unwittingly played such a crucial part in my recovery from depression at University. Hess’ works for wind band, so too Gregson’s, helped provide a sense of purpose and through my responsibilities as wind band conductor, an unexpected element of accountability. Making that connection amid the awards made for an unnerving emotional response. Thank God I wasn’t anywhere near a microphone.

What the composer awards achieve is surfacing that which would normally go overlooked in the on-demand world we exist in. When you’re sat in a room and made to listen to excerpts from new works written by people sat all around you, you can’t help but be interested. And if as you’d expect, those excerpts are an illustration of what prompted the judges to elevate these works for the considerable weighty prize.

That means what you hear is compelling. So compelling in many cases that the ridiculously short excerpts were a major disappointment, compounded by longer descriptions of what we’d just heard. Sometimes its better to just play the music and make your own mind up about it.

Perhaps the flip-side of that is that the short excerpts stimulate self-discovery. So it is this morning I’ve spent time discovering the music of Laura Jurd (Jazz Composition for Large Ensemble winner for ‘Jumping In‘), Sir James MacMillan‘s striking and reassuringly warm ‘O Virgo Prudentissima‘ peppered with the composer’s trademark lush close harmonic writing (Choral nomination), and the brilliant ‘Paramour‘ from Anna Meredith MBE (Innovation). The accompanying video is a visual delight.

Winner of the Sound Art – Martin Green’s ‘Aeons’ category piqued my interest too. Where do immersive soundscapes available on-demand? Green’s work was site-specific, hence the title ‘A Sound Walk for Newcastle’. But, as a listener driven by curiosity, creations like Aeons are my next must-explore. And I’d pay to download artistic explorations like that by the very best in the business. Where do I find that stuff? I’m not clear. It’s not being promoted much.

I like Charlotte’s musical language, illustrated in the second movement of IC – stripped right back. Delicate composition assets both in terms of harmonies and textures that create a character just about clinging on to what ever it is that is keeping them from their last breath.

A lovely evening showcasing new discoveries and, in the case of cellist Anna Joubert in attendance to hear the performance of one of her recently departed father’s solo work for viola, a chance to bump into people from my arts administration career back when I was young, thin and earnest.