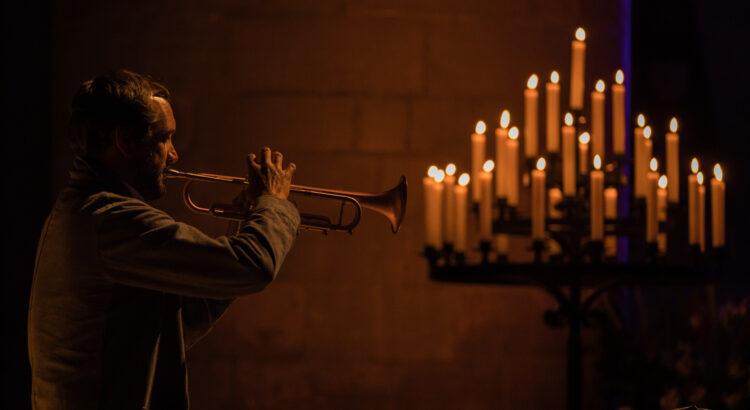 Distanced chairs lined the aisles and rugs covered the floor of Gloucester Cathedral giving attendees at the Classical Mixtape concert 7 July views of temporary stages constructed for performers at opposite ends of the Nave and one in the middle too. These dimly lit theatrical spaces created drama for a wide range of short contemplative pieces, some brand new, some new, some ancient.

Folk, medieval, spiritual and religious music fused in this unmediated concert which had at times a sense of consolation and healing to it, a space where community convened to experience dramatic architecture and wistful music, leaving two-and-a-half hours later restored and rejuvenated.

Especially moving music from cellist Clare O’Connell organist Carleton Etherington in an arrangement of Seachrán Sí by O’Connell which features on her 2021 album release The Isolated Cellist, accompanied by the voices of The Carice Singers who split position in the cathedral created a touching moment.

Composer Lillie Harris premiered two short pieces in the event, a fanfare Point of Pride for trumpeter Aaron Diaz, and a sustained vocal work scored for choir, originally to be performed by Merton College Choir but premiered here this evening by a last-minute change thanks to Test and Trace meaning the entire group needed to pull out of the concert 24 hours before.

The Carice Singers delivered Harris’ soothing sustained chords to great effect. Harris’ writing has a gentle simplicity to it that works well in the cathedral-like spaces, working in unexpected harmonic progressions that caress the soul. She clearly adores writing low notes for the basses too.

Classical Mixtape was a gently curated event that deployed voices and instruments sympathetically, bookending rousing melodies by Elgar and Hubert Parry with a range of unfamiliar music. Had you seen the works in a concert listing the newcomer might have overlooked it. But where Cheltenham Music Festival triumphs with this format is selling a discovery experience – a sort of magical mystery tour of music you never realised you wanted to hear in a vast architectural space.