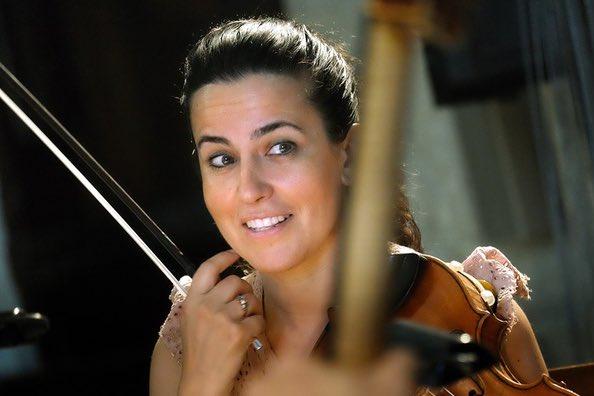 Composer Cheryl Frances-Hoad has penned a short piece in tribute to violinist Corrine Chapelle who died from cancer in March of this year. Corrine’s Song has been recorded in isolation by Menuhin School alumni including Nicola Benedetti, Alina Ibragimova and Alexander Sitkovetsky.

In February 2021, news broke that Grammy-nominated violinist Corinne Chapelle had been diagnosed with a rare and aggressive form of cancer. Friends rallied round to raise funds for a course of treatment in Germany, unavailable in the UK. Their efforts raised £171,000. Corinne died in March before the treatment could be completed. She is survived by her partner and six year old daughter Leila.

Described as ‘one of the most promising talents of her generation’ by Yehudi Menuhin, Corinne attended the Yehudi Menuhin School from the age of 16. As soon as her friends knew of Corinne’s illness, a large group of alumni, led by pianist Hyung-ki Joo, gathered together virtually in order to brainstorm how the huge sum for Corinne’s treatment might be raised. One idea, proposed by composer Cheryl Frances-Hoad, was near to completion when the news of Corinne’s death was announced. The alumni decided nevertheless to complete Corinne’s Song, an original piece of music for string orchestra.

It’s a heartfelt musical tribute that tugs at the heartstrings whilst keeping sentimentality at bay. In addition to the painful story the composition represents, there’s also a powerful statement about how musicians unite in a shared goal. There is community to be found in the videography, a demonstration of yet another way that music drives unity and promotes empathy. Much-needed right now.