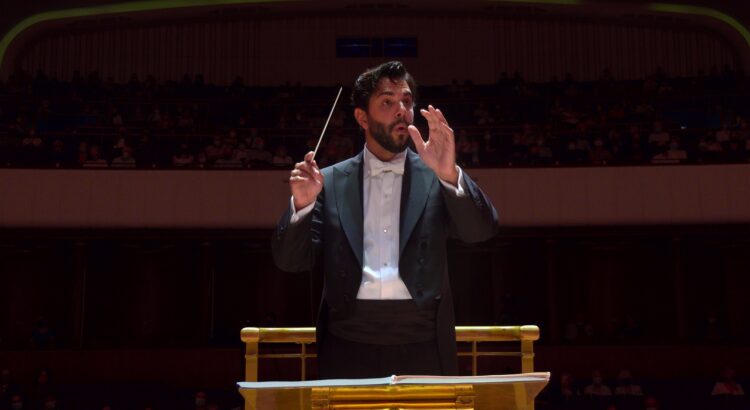 It feels like another world here in Liverpool. There’s a buzz about the place. The warm breeze and brolly-clad streets hint at a cosmpolitan feel. This and the art deco interior of Liverpool’s Phiharmonic Hall give distanced concert-going a sophisticated edge.

The Philharmonic Hall staff are organised, effcient, welcoming, and attentive. Ingress is swift and unfussy, middle-aged confusion is quickly addressed with eager eyes and non-aggresive questioning. I feel welcome in a space I’ve never visited before. I feel welcome. And I gasp when I see the interior. That is quite some achievement.

On stage the RLPO are a fresh-faced unpretentious bynch whose low-key low-key outfits bring out the rich colours in the wood and brass. Their presence echoes the joyous interior design. The RLPO have got this licked. Totally.

Their performance of Stravinsky’s Octet celebrates the industrious articulation the composer demands in the score. There’s a beguiling duo between flute and clarinet at the beginning of the second movement momentarily interrupted by the thwack of a mobile escaping from the flautist’s pocket. No matter. This is live. And live feeds on jeopardy. I’m impressed by how full the sound is given there are only 8 players on stage – a reflection of the blissful acoustic.

The Trombone Concerto performed by Peter Moore – tonight’s premiere available live on BBC Radio 3 on 25th June and available stream via the RLPO website from 29th June – is trademark Howard. Her musical language is effortless TV music without the distraction of TV images. Evocative vibes, shimmering suspend cymbals and harmonic slides pepper the work. She creates a tantalising sense of optimism in her music in such a way that listening to it you can’t quite be sure whether you’re getting carried away or not. Music I want to listen to again and again. Some trick. The second movement opens with a impassioned statement from the trombone underpinned by a pianissimo brass line that tricks the ear into thinking there’s an echo in the hall. The concluding movement doesn’t quite hold my attention as much, but I’m not discouraged. Howard’s language here makes her someone whose output I want to explore further. Not sentimental. Not mawkish. Engaging. Invigorating.

Later, Ravel’s Le Tombeau de Couperin. Full of grace in the first movement – all silk pyjamas and warm summer breezes. A sumptous second movement was the undoubted high point. At first, the third movement lost my attention until three quarters of the way through when especially impressive ensemble between woodwind and strings hooked me back in with beautifully interlocking textures and ravishing closing chords in the strings.

Utterly charming (and actually adorable) conductor Domingo Hindoyan is good with a microphone and even better with Prokofiev’s first symphony, drawing out unexpected colours in the first movement, weighty detached strings in the second, and a gratifying and tightly controlled raucousness in the final movement.

Dani Howard’s Trombone Concerto receives its broadcast premiere on BBC Radio on 25th June. The concert is available to stream via the Royal Liverpool Philharmomic Orchestra website from 29th June.

Dani Howard is one of a handful of composers at work today whose work consistently combines immediacy and compelling narrative. And that’s a powerful combination making her a powerful advocate for the contemporary classical music scene, providing leverage for the ongoing campaign for music education.

‘Coalescence’ is her latest work for large ensemble – triple wind, extended percussion and strings – and was premiered by the Royal Liverpool Philharmonic Orchestra yesterday.

“Coalescence explores the concept of humans versus nature, and how over the centuries I feel our species has attempted to ‘outsmart’ nature in many ways. It was originally inspired after walking past an enormous tree, that evidently over the decades had grown in and around a solid metal railing that had been built into the pavement in central London. The piece features real church bells, which signify the warning signs given to us by nature, and the work explores humans ignoring these warnings (with short brass interjections representing humans being both ignorant and resistant to accepting our climate crisis). There is a playful-like dialogue between the two, and almost like a game, the different elements bounce off each other in both playful and serious ways.”

The work showcases Dani’s distinctive style. A motoring rhythm that holds attention, highly descriptive musical cells, and an evocative sound-world with a sense of depth. The addition of vibraphone from time to time gives the whole thing a pleasing aural depth too. The switch between industrialised world and nature is efficient making it easy for audiences to identify where they are in the composer’s realised imagination.

With climate change ever present in our daily thought patterns, the pastoral sections in this work have a sobering effect on the soul.

There’s a video of the event on the RLPO’s Facebook page combining Radio 3’s broadcast.