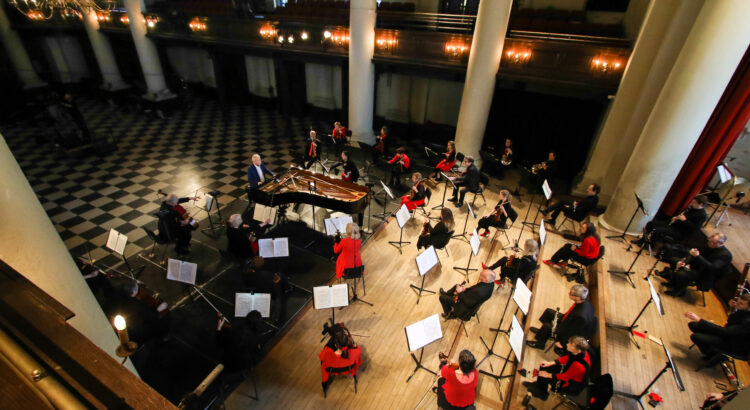 The London Mozart Players have consistently demonstrated themselves to be a nimble tenacious organisation, brimming with energy, with an infectious kind of tenacity.

Recorded at St John’s Smith Square in London in February and March 2021, the seventh series of Piano Explored supported by International Piano will feature five hour-long programmes, with Shelley giving an entertaining and insightful introduction to one or two famous or not-so-famous works for piano and orchestra, before performing them in their entirety with the London Mozart Players. Tickets for the online concerts will be a very reasonably-priced £8.00.

I attended the first episode recording a few weeks back. It was the first time I’d heard live music in many months. The present UK-wide lockdown has starved the ear of a live performance listening experience such that when I heard the first chords in the Saint-Saens the effect was highly emotional, at times overwhelmingly so.

Some of that emotional response is down to the acoustics which supported a clarity of listening I’d almost forgotten about at St John’s Smith Square. To hear so many different textures and orchestration details was a treat, not unlike the experience of hearing after having your earwax removed.

The rest of the emotional response in the moment is created by the energy LMP consistently brings to their performance – charmingly unpretentious but fiercely authentic. Smiles all around and appreciative glances in response to Conductor Laureate Howard Shelley’s direction.

What was the lockdown recording experience like compared to last year?

Interestingly on this occasion the lack of audience wasn’t quite such a painful feeling as it was during the summer of last year when I attended the LPO Summer Session recordings at Henry Wood Hall. This didn’t feel like a ghost event in that respect. Shelley’s easy charm, uncomplicated but passionate explanations and annotations combined with his effortless ability to look straight down the barrel of the lens whenever he talked to the camera had the effect of tricking me into thinking there was an audience in St John’s Smith Square. There’s only one other musician I’ve seen carry that kind of delivery convincingly – violinist Lizzie Ball.

Emphasising the USP of live performance and active listening is key

Most markedly for me was that returning to a live performance experience reinforced the need to be talking about listening. We so rarely reflect on the audience experience of listening, pre-COVID believing that potential audience members were more concerned about dress code, when to clap, and where the toilets were.

Now mid-pandemic we’re thinking about what changes need to come into effect to shake up the classical music experience. Change may well be necessary in some areas, but the opportunity that presents itself now is articulating what the experience is of active listening. To promote the idea of listening for textures, to reflecting on the emotional impact a series of sounds has on the audience member, is to promote the idea of mutually understood language underpinning a communal experience.

Why do we still think there’s something wrong with the physical experience or hold the false assumption that knowledge is required, when the critical faculties that will elevate the experience is curiosity and awareness?

In this way, the London Mozart Players Piano Explored recording at St John’s Smith Square had a profound impact on me triggering my thinking as well as reacquainting myself with how it feels to be in the same physical space as another human being. To have been able to be present in that moment is very special and a manifestation of LMP’s generosity. What it also promises is that this, like similar projects by other orchestras last year, will in time act as potent musical triggers for a range of emotions and memories. And that means the same will be the case for audience members who set foot back into auditoriums, whenever that will be.

In the space of a year some orchestras have risen to the unprecedented challenge COVID-19 has brought about. Whilst many of us would regard filming a concert as a straightforward process, the appetite to do it not to mention the budget was lacking. Creating a audio-visual archive of activities wasn’t in the marketing strategy of many cash-strapped arts organisations. COVID has made digital streams a marketing must-have.

They’re not replacements for live performance, but as substitutes they keep musicians playing during this hiatus, keep the brand visible, and in some cases reach more pairs of eyes than orchestras play to in auditoriums. The really potent question we should be asking is whether digital streams will continue to form an integral part of an orchestra’s activities when the concert halls do open again.

Tickets for the online concerts will be £8.00, with films available to view
for six months via LMP’s website (except for the Shostakovich concert on 13
May – 30 days only).

It was a sort-of first night for Fairfield Halls on Wednesday 18 September.

After four years of refurbishment and one a few false starts, the doors were flung open and Croydon’s proud community gently passed through the public areas and took their seats for resident orchestra London Mozart Player’s triumphant return.

An interesting programme conducted by a selection of LMP’s roster of conductors, charting the past twenty years of the orchestra’s 70 year history. Differing conducting techniques brought out a fascinating range of responses from the hard-working chamber orchestra.

The new air-con didn’t work quite as everyone would have wished and the front of house procedure is in need of tightening up just a bit. Ushers on the doors to the auditorium would be a boon. Teething troubles, nothing more. And it’s worth noting, the Duke of Kent was running a little late too.

The opening Prokofiev Classical Symphony demonstrated how clear the Fairfield acoustic is. A bright sound from the strings in the first movement balanced with voluptuous clarinets and mid-range flutes. The strings settled into a warm rounded tone in the second movement march.

Elizabeth Watts stood in for soprano Louise Alder at the last minute. My plus one (a rare thing for me) commented on how much she loved Watts’ voice. For me, there were moments when the soprano battled for prominence with the brass. Jane Glover’s baton technique however is joy to behold: graceful moves; a delightful bounce in her long frame; a precise beat mixed with a one or two gratrifying flourishes.

Alex Woolf’s commission – Fairfield Fanfare – was full of vim and vigour. Fun. Touching. A demanding play for such a small band, but a satisfying and a must-programme for any county youth orchestra whose conductor wants to please his or her students.

First movement started strong: a muscular sound topped with precision detail. Felt like we were listening to an entirely different orchestra – and a much bigger orchestra too. Gerard (a string player) makes them work hard. Nice. Second movement march had a resonant string sound, but was prompt. Possibly restless. Maybe even a hint of agitation about it. Third movement lost energy in places. The final movement saw sections competing; powerful brass in the fortissimos. Sometimes it felt like Gerard concentrates more on the strings than the brass. Missed out on the grinding bass at the conclusion of the movement.

Fairfield Halls (technically we should refer to the renamed concert as the Phoenix Concert Hall) is a rare thing. There’s an infectious democratic kind of atmosphere created by the audience. A real mix of people were in attendance to listen to an orchestra that has a vitality and warmth to it borne out of recent financial struggles. Considerable civic pride abounded. If we want to see an illustration of how classical music brings a community together, this would be a good place to start.