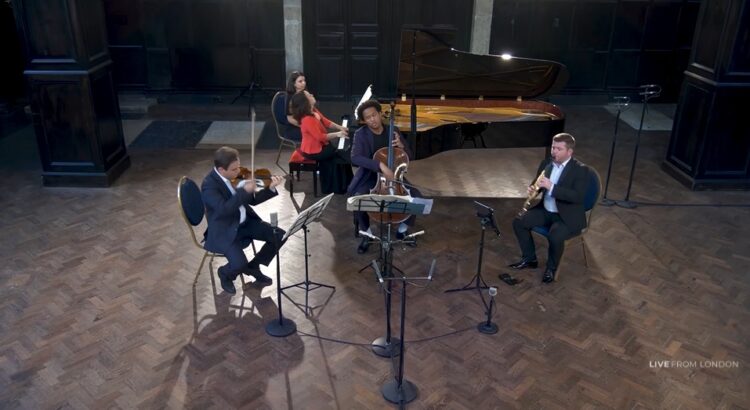 I’ve finally made a start catching up on Live from London’s Summer season. The streamed ‘recorded as live’ concert series, one of the first to launch after a couple of months into the pandemic here in the UK, is now well into its second year and thriving too.

The latest season combines filmed performances at the Voces8 Centre in central London, plus a selection of concerts from the Ora Singers, I Fagiolini, and The King Singers. There are a couple of orchestral appearances from Chineke!, London Contemporary Orchestra, and English Chamber Orchestra too.

On the face of it, not an easy chamber work to render as a viewing experience (if you’ve heard it in performance in real life). However, the filmed performance benefits from some sensitive directorial decisions. The boom, close-ups, and pull focus shots provide arresting action placing the viewer at the heart of proceedings. There is an overall elegance and simplicity to how it looks on screen that gives the performance a sense of gravitas without being too pompous.

Including a pre-performance analysis of the work from writer, journalist and broadcaster Stephen Johnson with musical illustrations by the players dressed in ‘rehearsal’ gear, lends things a simple kind of authenticity which more than makes up for the lack of a physical audience. The inclusion of a post-performance natter between all the players and producer Barney Smith was a nice addition. Brimming with natural rapport, the exchange is good-humoured and informative without being formulaic or self-conscious.

Live from London Summer 2021 continues with the final concert with English Chamber Orchestra on 22nd August available until the last week in September.