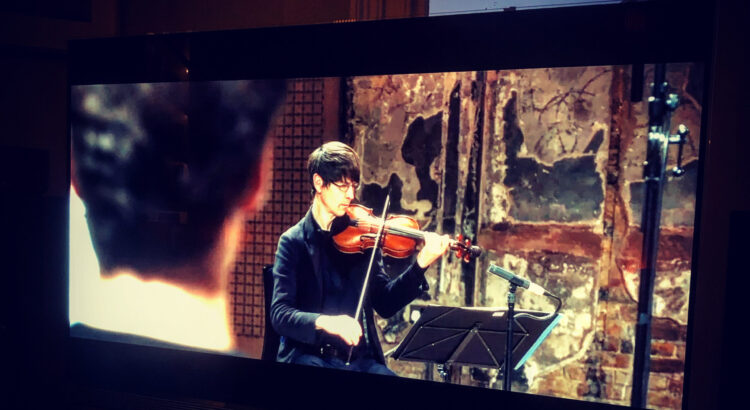 I’m never considered myself a Christian. Nor religious. At best I might consider myself spiritual. But, this Easter weekend, listening to the music of Bach, I’m beginning to question. Sort of.

First, the Orchestra of the Age of Enlightenment’s Bach St John with Mark Padmore (£7 via OAE Player).

Helen Charleston and Gerald Finley. Eye-catching. A story told by musicians to musicians watched by an isolating and isolated audience. To create such a digital theatrical statement that lasts over two hours and make its message linger twenty four hours later is a quite some achievement.

Part of that success is down to the direction (and Padmore’s vision) whereby chorus and soloists perform to the musicians who accompany them. All who feature in shot are cast members making the viewer a silent participant in proceedings. It is because of the striking visual direction that the audience experiences something so unexpectedly immersive throughout.

Of course, the direction wouldn’t have impact if the material didn’t inspire so. But, it is because of a unique set of events – a perceived collective sense of isolation and the pernicious ongoing low-level stress that promotes a sense of fear about what life will be like beyond June of this year – that such a story told through the mastery of Bach’s music, that the story not only maintains attention, but demands the redemption found on Easter Sunday.

Here’s the thing: I know St John Passion well. I’ve listened to it endlessly over the years. But I’ve never felt it. I’ve never experienced the spiritual message in this music until now. And what it took was a part-cinematic part-theatrical digital experience created and distributed amid a global pandemic for me to finally get it.

St John Passion experienced in amongst the busy lifestyle is a mere performance. This digital stream with its powerful visual storytelling has done much to shape Easter 2021 for me.