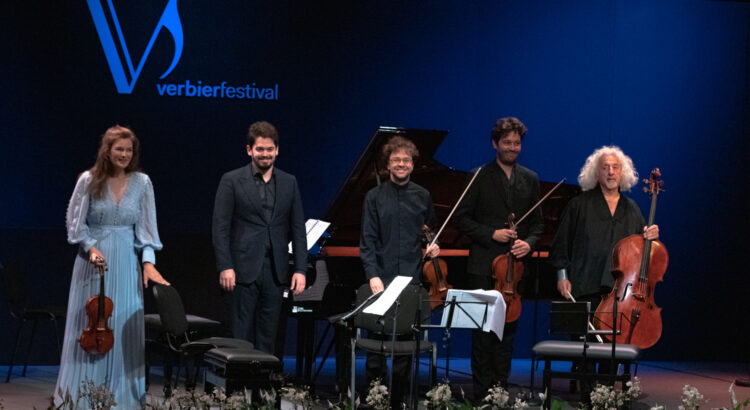 What Verbier has always done rather well has been bringing together leading musicians for powerful one-off performances. A few years ago I saw clarinettist Martin Frost join Janine Jansen, cellist Mischa Maisky, (I think) Nikolai Lugansky for a performance of Messiaen’s Quartet for the End of Time. It was the first time I’d heard the work and the first time I’d seen a clarinettist do circular breathing and it impressed and terrified me in equal measure. It was a hot sticky night in a packed church and it was incredibly intense music-making of the kind that comes about when musicians of that calibre join forces.

I’m not entirely sure whether ‘Unique Encounters’ this year is drawing on a successful format from the past or whether its a pragmatic response to the challenges that COVID has brought about on this festival this year. Advertised programmes have changed, ensembles have gone into isolation, and in the case of this concert tonight in Verbier, cancelling what would have been the Verbier Festival Orchestra’s programme in the marquee-like Salle des Combins resulted in a chamber music concert programmed for the intimate church up the hill moving to the big concert space. The programme not the church, you understand.

The Mendelssohn first movement sounded a lot like Mozart at times – the delicate brightness in Sitkovetsky’s articulation made me even write the observation down. But now I come to listen back to a different recording I wonder whether it was more to do with the forces – a trio of players – on a large stage having to work really hard to generate a lot of sound right at the beginning of a concert. The expressive tender second movement andante brought me back into Mendelssohn’s world with its sense of soldity and steadiness that reminded me of the Italian Symphony slow movement.

Sitkovetsky has a youthfulness about him when he plays – a mix of intensity and mischievousness that makes me think of the ‘cool’ teenagers at school who would duck, dive and thrive. And that was reflected in the energetic and purposeful stride he adopted walking off the stage at the end of the work. It’s never good to slope off at the end, I don’t think.

The Schumann trio saw Alexander Sitkovetsky paired with cellist Kian Soltani with Nicolai Lugansky remaining on piano. The chemistry between the two string players was phenomenal with some touching communication between them, especially in the second movement where there was intensity, tenderness and possibly even a little sorrow. The third movement lost my attention a little, but here again, this might have been down to the space and the demands on a small group of players during a more intimate movement.

It was the fourth movement that really caught my attention by virtue of the material. Schumann’s writing here is unsettling. The musical ideas never settle, the phrases are unexpected and jarring lengths and nothing ever rests. Needs some repeat listens to get my head around it I think.

Just as the change in colour and temperature was noticeable in the Schumann by virtue of a different musician stepping on to the stage (and articulating a different composer’s musical language), so the same shift occurred when Janine Jansen, violist Lawrence Power, pianist Lahav Shani, and cellist Mischa Maisky stepped on stage.

Jansen brings incredible energy with her, pulling the notes from the violin as though the instrument needs taming. And that energy sets the bar higher, and that combined with there being more instruments on stage means the sound is bigger and fuller. The communication between her, Sitkovetsky, Power and Shani throughout the comparatively more conventional musical material was something magical – real warmth and excitement.

The poignant second movement had a feeling of tragedy (or was it pathos?) to it, with nearly everyone’s eyes looking out for one another throughout. But it was here (perhaps because everyone seemed to be looking at one another) that I began to notice that Mischa Maisky didn’t seem to be connecting at all. The beginning of the third movement saw him set the speed before continuing in the way he had seemed before. It was only after the fourth curtain call when the musicians returned to the stage that we saw Maisky crack a smile. An off night? I hope not, as the entire thing was electrifying.