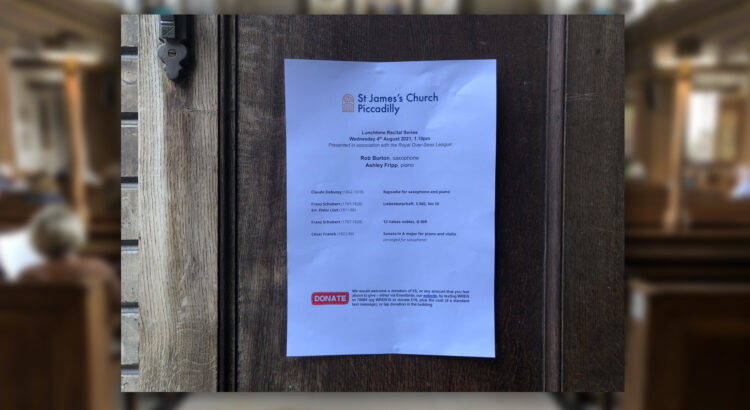 A demanding programme of unfamiliar and invigorating works for wind orchestra including a cracking show piece from saxophonist Rob Burton.

“Why are you going to a concert given by amateurs?” asked the taxi driver on the way to Lambeth Wind Orchestra’s Saturday night concert this past weekend.

“Because they work hard and I’d like to hear the results,” I replied.

A far more succinct response would have been, “Why wouldn’t I?”

I was irritated by his rookie attempt at jocularity. It didn’t land well at all. When he then moved on to pissing and moaning about the borough where I lived I was keen for the journey to end (preferably at the sought-out destination) and for me and The OH to pile out.

What LWO does well is cultivating a community feel. This was the second concert of theirs I’d attended, the first where guests were greeted by conductor John Holland at the door. Don’t underestimate the dividend. If the conductor is welcoming you personally, then you’re going to have to be a cold-hearted bastard to end up not appreciating something in the hours that followed.

As it turned out, I didn’t have to look very hard. LWO players are an impressive bunch. Thirteen of the 52 players were ‘guest musicians’ meaning the core of the rich ensemble sound is powered by regular members. And when they play a chord as one complete ensemble the evocative sound of well-balanced wind band resonates across the chest, (for me) stirring happy memories of twenty-five years ago when I was at university conducting a wind orchestra.

It would be easy for an amateur band not to sound that way – one duff bit of tuning and everything jars, heads start to turn, and people start looking at their watches. But not so for LWO. Even at the point of tuning for performance its apparent that people listen, adjust and adapt. They pay close attention to Holland’s exacting and expressive beat – one of the reasons I imagine LWO secured Gold at the National Concert Band Festival last week.

The quality of the playing was most evident in Holland’s arrangement of Vaughan Williams’ Fantasia on a Theme by Thomas Tallis. Daring. So much of the work depends on the textures of the strings. Dry mournful Sunday afternoons are best evoked by string players. That a quartet of players sat behind us played VW’s transcribed score with such warmth demonstrates not only vision on the part of the arranger, but an understanding of who in the band could realise the dream to greatest effect. The Thomas Tallis Fantasia is a demanding blow for a wind and brass player – endless extended sequences for (some) instruments right at the top of their range. But there were moments of intense emotion. The hideousness of the real world outside was momentarily put on hold. Exactly (I think) what VW intended. Quite some achievement for an amateur band playing in a concert hall at a school in which the composer taught.

Similarly impressive was Morton Gould’s epic Jericho – brimming with detail, dramatic perhaps momentarily piercing dynamic range – and Claude T.Smith’s blistering Alto Saxophone Fantasia. Soloist Rob Burton deftly delivered the punishing solo line with a warm round tone and gratifyingly unpretentious articulation. Sometimes swamped by the massed sound of the band in the opening material, his consistent musicianship made this an exhilerating discovery, the expansive and demanding cadenza in particular demonstrating how there’s much to discover from this remarkably mature instrumentalist.