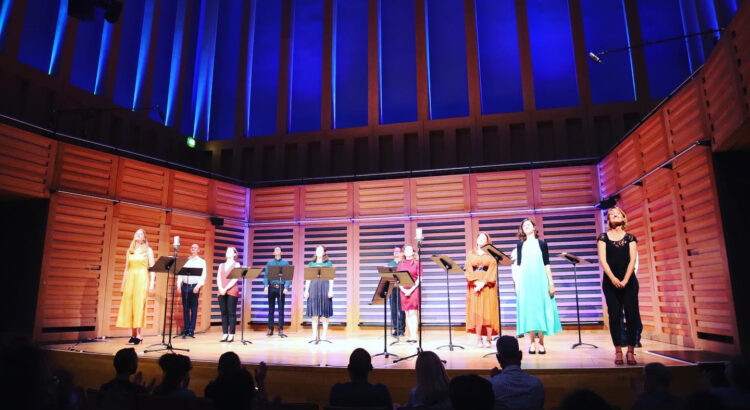 Since restrictions have eased and I’ve ventured out to real-life concerts again I feel as though I’ve discovered more new music.

This is a consequence of mitigations making smaller forces more practicable of course. But the unexpected result is that I’m finding the discoveries which emerge from such events really satisfying.

Historically I’ve always sought out orchestral forces. Now, as in the case of Echo Ensemble’s performance at King’s Place last night, I’m finding myself more engaged in what can be created with only a small number of musical lines.

Echo – a group of singers that met as participants of The Sixteen’s young artist programme Genesis Sixteen – performed a mixed programme of early, modern, contemporary and new works, including two winners from the group’s inaugural Composition Competition Rory Wainright-Johnson and Lillie Harris, blind-judged by Judith Weir and Robert Hollingworth.

A selection of three songs from Benjamin Britten’s Five Flower Songs formed the centre-piece of the climate change inspired programme, and was one of works demonstrating the ensemble at its ease. Some gloriously ends to phrases, especially the soprano line at the end of ‘Fair Daffodils’ and the sliding bass at the conclusion of ‘The succession of the Four Sweet Months’. ‘Evening Primrose’ still sounds fresh and modern despite it being 71 years old this year. Some really remarkable dynamic transitions in this movement demonstrated the ensemble’s confidence and flexibility.

Judith Weir’s ‘Vertue’ was an exquisite new discovery. Echo Ensemble’s sound compared to say the Choir of King’s College live recording feels a good deal more modern. I think, though can’t be 100% sure, that’s down to the vowel sounds. What I really appreciated in this piece was Weir’s word-painting (listening out for the melodic line over ‘angry and brave’ which took me by surprise) and the thick warm chords created by the entire ensemble in the final verse.

The joint winners of the Composition Competition who featured in the London concert adopted an interesting range of vocal production techniques to create two distinct soundworlds that told the story of a ‘very small and damaged and quite dry’ Roman water nymph trying to ‘summon a river out of limestone’.

Wainwright Johnston’s highly descriptive ‘Summoning Dance’ employed a variety of percussive rhythmic patterns in the choir creating an image of a stark landscape above which the solo soprano sought to summon rain.

Lillie Harris’ ‘already gone’ from which the concert tour gained its title, utilised reptitive phrases more. An especially magical moment when the phrases ‘she tries’ ‘she struggles’ and ‘she pleads’ were repeated shortly towards the end.

An enjoyable evening directed by Sarah Latto with warm and extended appreciation from the enthusiastic audience. The Already Gone Tour is a Genesis Kickstart Fund project supported by the Genesis Foundation, also made possible thanks to the Golsoncott Foundation, RVW Trust and THe London Community Foundation: Cockayne – Grants for the Arts.