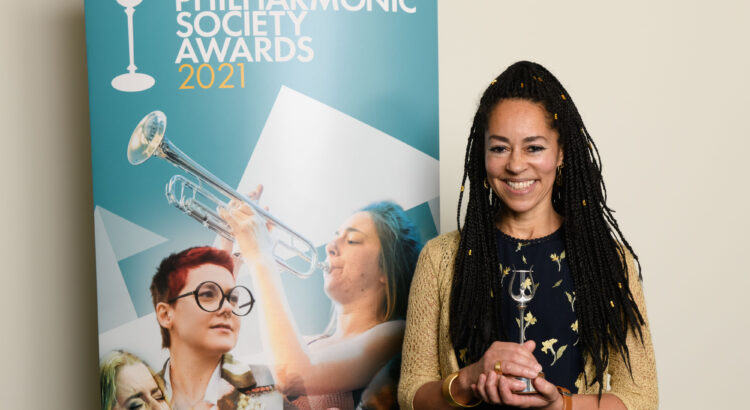 Given that it was live-streamed on YouTube with highlights and excerpts broadcast on Radio 3 on Monday 8 November, asking for a ticket to this years RPS Awards felt a little odd. Awards ceremonies are essentially just a series of announcements, the bare content of which can easily be gathered from a webpage, tweet or press release. Assuming you’re not in line to collect an award, why the need to attend in person?

It is the atmosphere that matters most. That’s what can’t be conveyed online, in video or on-air. The reuniting of old pals, reconnecting over experiences of pandemic-driven gardening, running, or remote working. “Fancy another?” says a pal in the Cock and Lion on Wigmore Street. “Just a small one,” I say. Shortly after it’s a quick mad dash up the road to the main event. It’s dark. There’s a nip in the air too. Shut your eyes and you’d be forgiven for thinking it was Christmas Eve.

And here, quite unexpectedly the real excitement of the evening. Up in front laughing and joking with one another, three oddly familiar faces. Full of verve, brimming with energy – Mark Simpson, Cordelia Williams and Nicola Benedetti. Here and now I feel like a Lower Fifth; they feel like the Sixth Formers. Celebs. Individuals with talent and vision and passion and spirit. It would be easy to smile, say hello and wheedle my way in. But I won’t. Because it’s their night. Leave the talent alone.

The buzz is as unexpected as it is invigorating. So too is the hubbub in the auditorium.

I apologise to the person sitting in R16. “That’s my seat I think. I’m terribly sorry.” After she moves down I quip how it feels like we’re on a train what with the confusion over the seats. Only later does it become apparent that the person in question is in fact a prize winner from The Hermes Experiment. In the seat in front of me, a long-haired blonde woman surreptitiously drops her mask to say hello (it’s Heloise Werner). And across the aisle pianist Chris Glynn smiles back at me. I write like these people are old friends. They’re not. They just feel that way. It’s all unexpectedly warm. It’s like being a part of a family. I’ve missed this feeling a great deal.

The award winners are well-deserved, appreciative and are perhaps in some respects even irrelevant. The shortlist reads in its entirety as a reminder of the many potent creations pored over by hungry audiences starved of live, curious and grateful for digital. The winners in this hybrid world succeed in a similar way, perhaps gaining more prominence as a result of the unusual way classical music and the talent that creates it rose to the challenge of the pandemic over the past twelve months.

I was especially pleased to see composer Dani Howard win Large Scale Composition for her Trombone Concerto, and both unsurprised and excited to see Nicola Benedetti win Instrumentalist for basically being brilliant again. Laura Bowler’s Chamber-Scale Composition win for Wicked Problems drew huge excitement in the Wigmore Hall (and shone a light on another Huw Watkins work I need to listen to – his Violin Sonata with Tamsin Waley-Cohen).

The Storytelling Award winner Kadiatu Kanneh-Mason’s House of Music reminds me of a Christmas list addition (the nominee Kate Kennedy’s Ivor Gurney biography is something I’m disappointed to say I hadn’t even been aware of and will rightly compete for my attention come Boxing Day this year).

Pictures (except for Wigmore Hall interior) are by Mark Allan Photography

The RPS Award shortlist has been announced this evening. It’s a compelling list – a signpost or spotlight for those creative endeavours and individuals that tell a vibrant story of the classical music scene. The shortlist is included below. The winners are announced on Wednesday 18 November at 7pm on the RPS website.