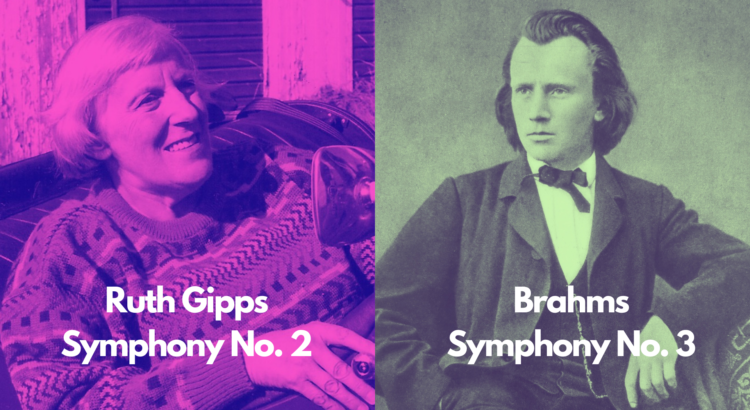 Not heard of Ruth Gipps? No. Not surprised. Gipps was a phenomenal composer who lived between 1921 and 1999 who also happened to be a pianist, conductor, and an oboist. She studied at the Royal College of Music in 1937, played with the City of Birmingham Symphony Orchestra, had a shortlived performance career before a shoulder injury stopped things, and penned the second of her five symphonies in 1945.

The second symphony feels like a continuous sequence of contrasting short movements that the series of four movements you might expect from a more orthodox symphony of the time. But what makes it a Thoroughly Good Symphony is that there’s something, even if you can’t put your finger on what it is exactly, that holds the whole thing together – the story of a film without the film getting in the way, if you like.

Gipps writes brilliantly for the brass section – listen out close after the start for some blistering brass ensemble writing which should make you go weak at the knees. Listen out for The March too – highly descriptive, with an irrepressibly rousing English folk music influence to it that is reminscent of Vaughan Williams’ Folk Song Suites (assuming you’re familiar with them). The slow movement around which the entire 20-minute work pivots is utterly ravishing, with a horn solo that seems to hang in mid-air. The ‘tranquil’ moment which follows has at its heart a playful pastoral melody that still manages a modern and original feel to it. Glorious stuff. It seems incredible to me this was written and premiered in the same year as Benjamin Britten’s opera Peter Grimes.

Be sure to listen out for Ramon Gamba and the BBC National Orchestra of Wales’ recording of Ruth Gipps’ second symphony on Chandos, including the work she wrote in 1942 which was premiered at the Last Night of the Proms that year, ‘A Knight in Armour’.

The first movement opens with a joyful uplifting melody powered by a rich orchestral accompaniment that stirs the soul. This same uplifting melodic idea returns throughout the movement. It’s like a shot in the arm every time.

There’s a fairytale feel to the second movement, opening with woodwind and brass playing something that sounds like a hymn. There’s simplicity and hope embedded in this material which when it expands to the wider orchestra takes on a blissful countryside feel.

The movement that follows is mournful. The melody lilts from side to side mixing sorrow and delight in equal measure. There’s a sense that something is lost and that the music is recalling happier times. It is dangerous music for those of us who have a weakness for melancholy.

After a distant whispering introduction, the fourth movement bursts into life with an epic sequence that has an air of the end of term about it. Unbridled joy powers this entire thing with loud brassy proclamations, excitable leaps and bounds in the strings. What’s mildly unexpected, weird, but also pleasingly unconventional is the way the work finishes. Not with a bang, but with carefully constructed serenity. We’re not savages, after all. Leave the auditorium in an orderly fashion please.