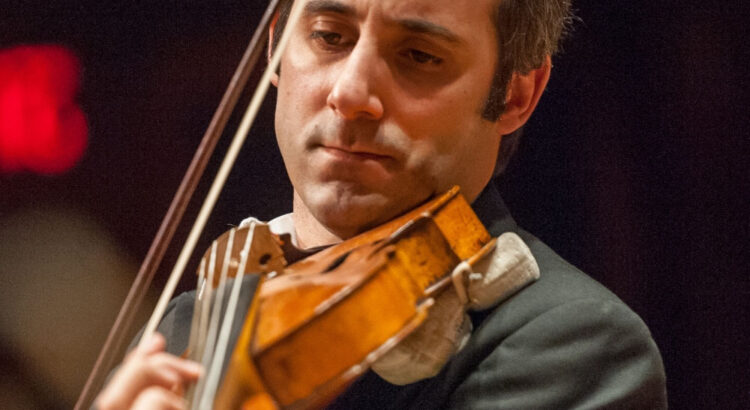 Alfonso Leal del Ojo, CEO of The English Concert reflects on his role as a player-manager in a guest blog for Thoroughly Good

As a player-manager, my journey in the performing arts has probably been slightly unconventional, although by no means unique. I started filling a gap at the Irish Baroque Orchestra in 2007. I led the Dunedin Consort during tremendous growth between 2010 until 2019, when I took on my current role at The English Concert.

Non-player managers have the same passion for the art form as those that have been successful as musicians. What differentiates us is that we have known for longer and in closer quarters what players tend to think about managers which at times can be negative. I have been playing with The English Concert as principal viola since 2007, so when I joined as chief executive, I knew the group well, its people, our audience and supporters. I have continued performing alongside my management career, and I think that being on stage with my colleagues has allowed me to forge a more trusting relationship with them than would otherwise have been possible.

Sometimes, they will disagree with me, it’s only natural, but I would like to think that fundamentally, they understand more readily that I have their best interests at heart and that I am doing my best for the success of The English Concert as a whole. This has been particularly important in the context of what we have all lived through since March last year.

There has been so much upheaval for all of us working in the performing arts. Working in the current environment has been a constant battle, hours of planning and coming up with contingency plans, finding out that the contingency plans were not even close to meet our worst expectations, replanning again and finally, sometimes, being able to come above the parapet and present some work.

When I joined in as Chief Executive, I wanted to ensure the live performances that were reaching thousands of people on tour remained alive for longer, and those that could not make it to the concert hall could experience some of the magic and put in place a strategy to record our Handel operas (either in video or commercial recording).

In March 2019, we should have toured Handel’s Rodelinda to the USA, Europe, and the UK, but it could not be, so I am particularly pleased we could rescue the recording plans, which will see the light of day later this month.

Last month we were meant to tour and record Handel’s Tamerlano. All performances we had planned were cancelled one by one, but I kept pushing to ensure the scheduled recording could happen. Unfortunately, strict quarantine rules for non-UK based artists meant some of our soloists were unable to join us, and with one of them contracting the virus just before we were about to start, the project could not move forward.

What could we do? We owed it to our musicians to support them financially and maintain our sense of purpose, but equally to our audience and to our donors who had very generously supported our plans. Earlier in March, Lady Linda Davies from the KT Wong Foundation had approached us to film Handel’s La Resurrezione for Sky Arts. There was something especially poignant about recording a piece of music that spoke of resurrection after the performing arts had experienced such a devastating loss.

Tamerlano was off the table, but discovering La Resurrezione left us wanting to explore the piece in more depth. The constraints of TV production meant we had had to cut the piece, so here we had our opportunity to work on the piece in full. We had to make some changes to the cast to honour our commitment to the artists we had booked for Tamerlano, but the decision felt right.

There have been various moments in my career when, as a performer, I have felt we were creating something exceptional. These last few weeks of being involved in La Resurrezione have felt that way, and I am sure that the recording will capture some of the extraordinary excitement we all felt.

I have been very fortunate to have experienced some wonderful moments on stage with my colleagues. In 2017, at the last performance of our tour of Ariodante at Carnegie Hall, after the second break (already three hours into the concert!), we came on stage before Harry and the soloists, and the audience went wild for the orchestra. It made me feel so proud!

Of course, the soloists were exceptional and the music stunning, but it was very special to be on stage. I certainly didn’t envisage when I was an awkward teenager living in Seville, buying CDs of all these fantastic musicians that I would end up doing just that, let alone running one of the most celebrated chamber orchestras in the world.

Handel’s Rodelinda is released on 14 May and is the first Handel title The English Concert is releasing as part of its association with Linn Records.