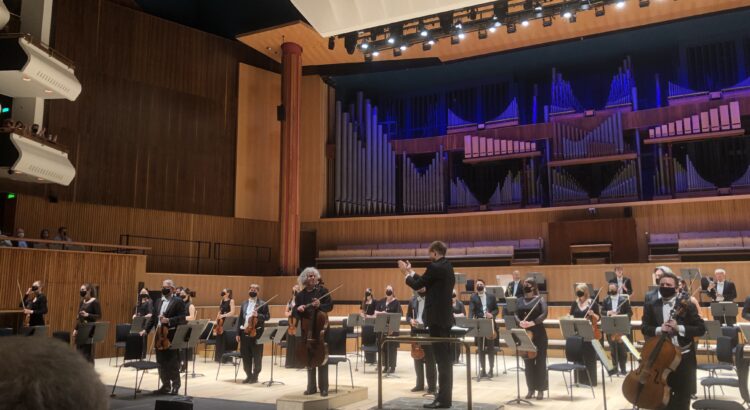 It was the RPO’s first concert at the Royal Festival Hall since March 2020, and only the third night of concerts at the Soutbank Centre venue. The orchestra shaped up well, and whilst the atmosphere wasn’t quite so ramped as at the Barbican for the LSO’s first outing a few weeks back, the programme did fit the bill emotionally.

Rossini’s Silken Ladder overture did feel a little raggedy in places. There wasn’t the consistent precision Rossini’s particular writing demands in the score. No surprises really given the complexities of the articulation and the distance imposed on the players. But the breeziness of the melodies and the urgency of the motoring rythmns injected some energy to proceedings on what was a surprisingly hot evening.

Steven Isserlis brought his characteristic ebouillance the stage, brimming with joyous enthusiasm and excitement, producing in tandem with Vasily Petrenko a touching and tender slow movement the impact of which (that delicious moment when you realise everyone around you is completely still) by surprise. A sense of boisterous optimism underpinned the concluding movement. Isserlis emanates warmth in everything he does – evident by the bouncing curls and wide michievous smile. This performance of Haydn’s Cello Concerto felt a reassuring pat on the back driven by an enviable positive mindset.

For a work I’ve spent much of this past year listening to recordings of (Andrew Maze with RLPO in particular) Vaughan Williams Symphony No. 5 felt surprisingly intimate, with loud spasms in various places. This isn’t to say the performance wasn’t enjoyable or appreciated. The intimacy gave things a personal feel as though the entire band was talking as one slightly damaged but nonetheless determined individual.

Right from the start, the strings sounded rounded, sweet and resonant, in a taut ensemble. The scherzo was delicate and fragile, the third movement raw, with one especially magical moment at the end when the harmonies pivot as the principal viola invites first cello then upper strings to resolve the harmonies. Come the conclusion there was a sense not of closure so much as a promise of a new start. In that respect the symphony fitted the emotional bill I came to the hall with – a need for a musical statement that went some way to make sense of what had passed, offering a path to something different in the coming months.