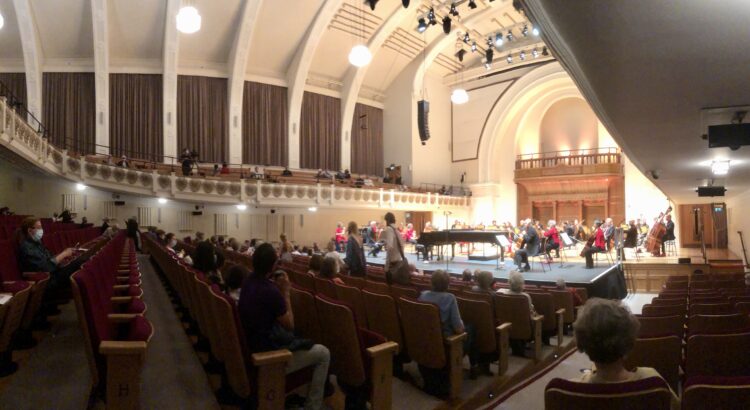 With no programme there’s a risk of not quite knowing what it is you’re listening to. This isn’t necessarily a problem, especially for those of us who consider curiosity to be the only requirement for the live music experience. Not knowing is A Boon.

Not knowing can also throw up some surprises. For the first twenty minutes of the London Mozart Player’s Cadogan Hall gig I thought I was listening to a Mozart overture from an opera I couldn’t quite remember the title of. Hence why I applauded heartily after the final chord, only to discover a few seconds later that the applause had petered out and the work was unfinished.

Something in the music that followed triggered a thought: that sounds like Beethoven, doesn’t it?

The confusion says something about early Beethoven symphonies I had forgotten about. Beethoven’s symphony number two has hints of Mozart, so too hints of the complexities in Beethoven’s writing that perhaps are more obvious in his later symphonies.

Conductor Stephanie Childress asserted herself on the podium with elegance, poise and panache. I was transfixed by the movement of her arms – motion from her shoulder all the way to the tips of her fingers. There was a sense of flow and grace in every move. Precise direction in a clear baton technique drew out some remarkable ensemble work and arresting textures and articulation.

Isata Kanneh-Mason played with verve throughout the demanding Mendelssohn Piano Concerto No. 1, creating a tender melodic line in the second movement. Her fluid technique came the fore in the bravura third movement packed full of decorative elements that make the soloist reach for both ends of the keyboard. Isata was engaged but unfazed – a performance she fashioned from the instrument in front of her.

On a logistical front (these are unusual times), hats off to Cadogan Hall staff for being the venue who have managed to create as near normal a concert experience (including front of house) as I recall pre-pandemic. The acoustic isn’t quite so generous as St John’s Smith Square, nor as clear as Fairfields in Croydon, nor as supportive as Philharmonic Hall in Liverpool.