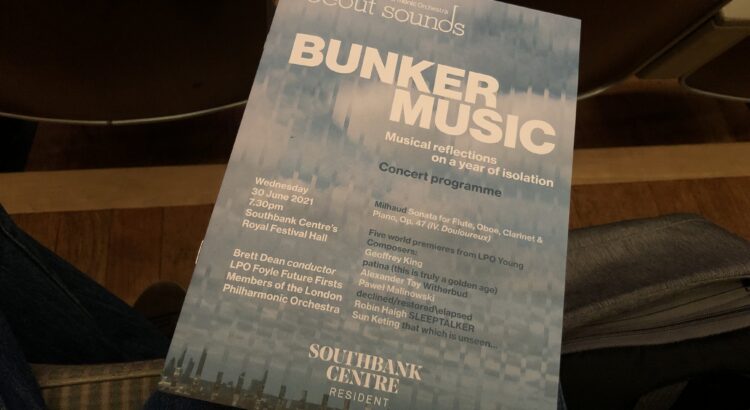 Five new composers had their newest works premiered by the London Philharmonic Orchestra on Wednesday this week at the LPO’s Debut Sounds concert.

Robin Haigh, Sun Keting, Alexander Tay, Geoffrey Smith, and Pawel Malinowski worked with the LPO throughout the pandemic, first remotely, then later in face to face workshops with musicians from the orchestra and LPO Composer in Residence, conductor and mentor Brett Dean, before hearing their works performed to a socially-distanced audience.

The brief for compositions was to create eight minutes of music inspired by the ongoing COVID-19 pandemic. No easy feat I don’t think. Creating something which is distinctive, true to your own voice whilst avoiding the obvious trap of literal representation or mawkish sentimentality strikes me a difficult task for any creative individual.

On TV Dennis Kelly’s two-hander Together starring Sharon Horgan and James McEvoy is a good example where literal recounting of some of the most potent elements of the past year has worked (it made me cry a great deal when Horgan’s character describes how a relative died watched by loved ones on Facetime). Similarly, Howard Goodall’s Spitalfields Festival tribute ‘Never to Forget’ does poignancy well by putting the names of the carers who died in the first wave of the pandemic front and centre.

Prompting us to look from different perspectives, is perhaps then key to the creative challenge when writing in response to the pandemic.

In Geoffrey King‘s patina (this is truly a golden age), depicts fractured concurrent but separate experiences that eventually coalesce around one shared tonal musical experience, perhaps music with a quaint sense of nostalgia about it too.

Robin Haigh draws on an obvious fascination with British Light Music in Sleeptalker but on a first listen appears to break down the familiar and reassuring into something where recognisable boundaries of every day life are shifting making comprehension both straightforward and oddly unsettling difficult. Haigh was recently announced as a Britten-Pears Young Artist 2021/2022.

Guildhall School PhD student Alexander Tay took achieved a similar effect with Witherbud as perhaps Kelly did in the TV drama Together, by shining a light on a specific experience we’ve all experienced through the past fifteen months. In his writing he combines multiple instrumental lines moving at radically different speeds to create a stop-start effect – a musical articulation of the false endings to lockdown and the associated disappointment we all experienced. Tay’s writing is much denser than the other composers pieces that gives me the sense of multiple experiences colliding.

In declined/restored\elapsed by Pawel Malinowski the orchestra’s sound created a surface upon which experiences, reflections, or memories from the past year were displayed as if in a museum. And below the surface, a sense of something dying away – what Malinowski refers to in the programme note as fin de siecle. This was a much slower-moving piece consisting of suspend lines moving independently to create something eery and perhaps even dark.

that which is unseen by Sun Keting

London-based Chinese composer Sun Keting used Ikebana – the Japanese art of flower arranging – as the creative impetus for her piece that which is unseen, drawing our focus to negative space or ’empty space’. “When one looks at the art of flower arrangement, one learns to appreciate not only the beauty of the flowers and branches, but the empty space within and around.” I really connected with the intent behind Keting’s writing – slower builds to a glorious shimmering climax – reminscent of the way in which in the early days of lockdown I recall seeking out joy in the detail that would normally go overlooked.

This felt like a very special event. Thoughtfully conceived and rigorously responded to by a group of composers all in their early thirties who brought eagerness, uncertainty, and honesty to the stage in their works and their own physical presence. They successfully created statement pieces that underpin the strange transition we’re all experiencing back into live performance. These are pieces that are of the moment, inspired by the oddest period in recent history, all of them providing different perspectives that bring about a different kind of catharthis.

The 2020/21 programme is generously supported by the Adam Mickiewicz Institute, the RVW Trust, The Leche Trust, and the Garrick Charitable Trust.