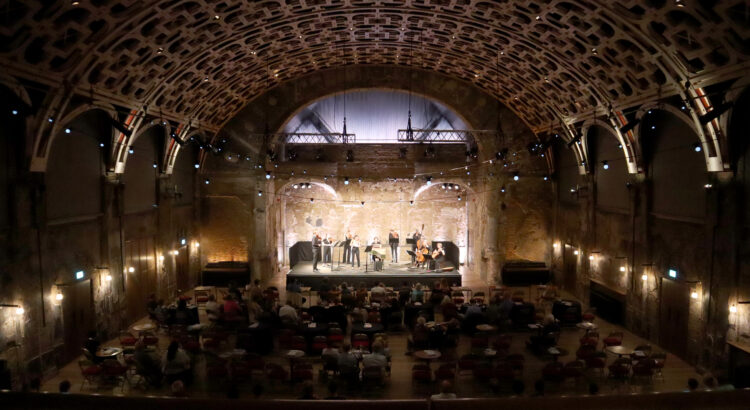 And the combination of the searing heat of the day, the post-blaze plasterwork preserved after the devastating fire that tore through the Grade II building in 2013 resulting in a £15 million insurance payout, and the decorative timber-grid ceiling, gave proceedings a theatrical setting that added to the experience.

But this wasn’t a painstaking recreation of a listening experience in a bid for authenticity. Lively, engaging throughout, the all-too-brief it seemed performance (they only missed out the D Major Vivaldi concerto) had at its heart the passion and sincerity that characterises any Nicola Benedetti project.

Benedetti didn’t speak for long before each work, but what she said was enough to draw focus and attention, meaning that the live music which followed revealed some of the magic of baroque music which often goes unsaid. The last variation of the Gemianini Concerto Grosso featuring the electrifying activity of cellist Jonny Byers and lute player Elizabeth Kenny is a good example. The stage felt like it roared.

This was a stage shared between peers sharing in the joy of live music-making. Smiles and winks exchanged between one another throughout. At one point when strings were slowly being re-tuned in the heat, even shrugged shoulders. An event gratifyingly lacking in airs and graces.

It’s the second time in a week I’ve been amazed at the volume of sound one instrument (let alone nine) can create. Who needs a symphony orchestra when four violins can provide colour, texture, and rhythm? In a lot of places it was when two violins precisely articulated phrases and created delicious gaps in between each note that the magic was palpable.

I really appreciated how the event was how it tied in neatly with the Decca release the week before. Not a coincidence. This was Nicola Benedetti’s ‘dream’ I understand from a trusted source. Perfect sense. Combining the two – album release with concert appearances – maximises exposure for both. The ‘Baroque’ concerts were originally events scheduled for the first few days before Christmas but were postponed due to the then last-minute lockdown. Looking at the 70% audience that delay hasn’t necessarily impacted on appetite.

As a concert format, it works. An unusual space stripped of the usual trappings of concert-going, introduced by a practitioner who knows her game and wants others to love it. COVID restrictions demanded the event was way too short and I’d suggest gave an excuse for some of the front of house and bar staff to be unnecessarily brusque. Regardless, aside from the performance, the magic of the format was that I finished the evening wanting more.

And if you can’t get along to the concerts (they run twice daily until Wednesday 21 July) there are CDs available in the foyer folks.