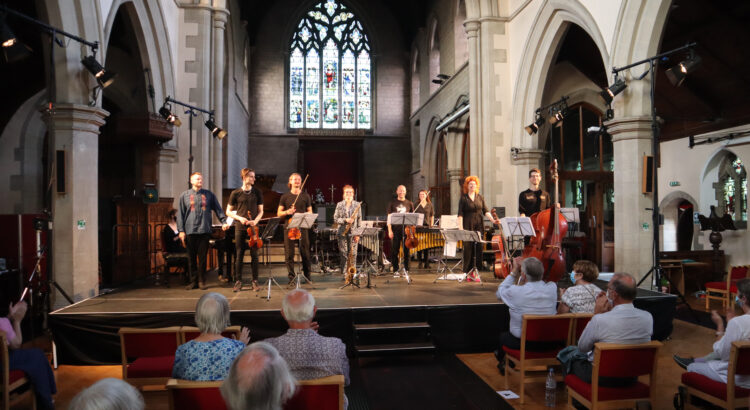 I’ve written before about how Gillam’s ‘Time’ recorded weeks before the first UK lockdown, ended up being something I listened to time and time again in the months that followed.

So much, in fact, that come the live performance in glorious 3D sound on Thursday of Thomas Yorke’s Suspirium it was almost too much to bear – a musical reminder of a time when those of us with empathy looked on the world and wondered what the hell was going on and kept on asking when it would end.

Suspirium, like John Metcalf’s arrangement of Bjork’s ‘Venus as a Boy’ underlined what a considerable achievement Gillam’s work on Time really is – not only is it a cracking album from beginning to end, but hear it in the same physical space and it takes on a whole other form.

The “kind characters and generous people” Jess introduced on stage with her are called upon to play resourcefully, clapping, banging, and scraping in addition to the more conventional up and down bows.

Gillam bounces around in the middle communicating with her peers, passionate leadership without pretension. From time to time members of the group look and smile at one another connecting over a shared sequence that tickles. Infectious smiles are exchanged, observed by the distanced masked audience. And at the beginning of John Metcalf’s ravishing arrangement of Sakamoto’s ‘Merry Christmas Mr. Lawrence’, blissful pizzicato from Gabriella Swallow – notes that bounce around the church like they’ve suddenly learned themselves that restrictions have been eased.

John Harle’s ‘Flare’ highlights the new kind of classical music that really isn’t being written about nor celebrated anywhere near enough. It’s a style that proudly draws on multiple influences and genres. It’s a style that refuses to revere. It’s not light nor easy (just look at what Harle demands of the players). It’s not crossover. Nor is it imitative. This new classical, as demonstrated in Harle’s ‘Flare’ is a glorious shimmering colourful celebration of music, here brought to life by an energetic ensemble.

Reference should also be made to what could so easily be overlooked in amongst all of this loveliness: Jess Gillam’s technique is remarkable. As a wind player myself I don’t understand how such a solid unwavering column of air can support a melodic line without even a hint of air escaping where her mouth meets the mouthpiece of the instrument she’s playing. The tone is round and firm. It caresses. It’s never shrill. It’s consistent too. Never a duff moment. The mind boggles.