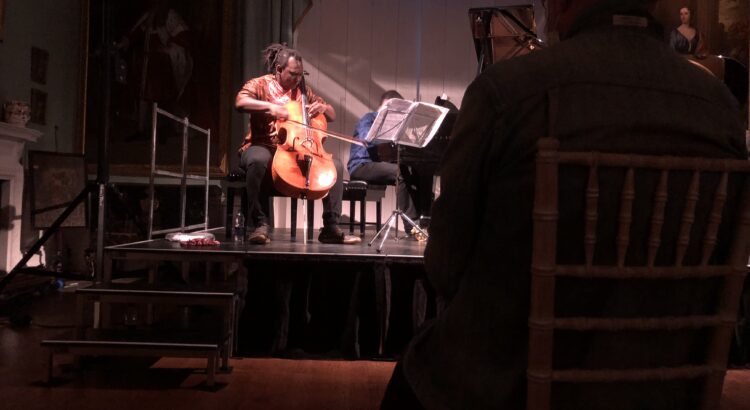 Profuse apologies to pianist Benjamin Powell. Yes, you were on the bill and you were fantastic, but as I think you know by now (surely?) when Abel Selaocoe steps onto the stage, well the light shines on him no matter what you do at the keyboard. I’m sorry Powell. That’s just how it is. I know you’ll understand.

This was the first time I’d seen Abel in performance. He has a rare thing going on. His pre-publicity material – his photography, his agent’s blurb, his all-too-brief biography – sets the tone by saying very little. Abel Selaocoe triggers the imagination before you’ve even made it to your seat.

His was the concert in this year’s Ryedale I wanted to go to, partly because of the pre-publicity material. Partly also because of what other people were saying about the cellist. And when somebody like me sees someone like Selaocoe debuting in something like the BBC Proms, it won’t come as a surprise to learn that somebody like me wants to see him before everyone else.

In truth, I am late to the party. The South African cellist famed for combining multiple genres, improvisation, body percussion, and an oh so warm vocal line in his performances has already appeared across the UK, collaborated with the BBC Philharmonic and the BBC National Orchestra of Wales (with whom he appears with his group Chesaba in the Proms later this year). He’s not new. He’s just new to me.

He is a force of nature. A remarkable storyteller who brings so much of himself out on stage that there are moments when I’m left feeling as though I need to sweep it all up and give it back to him in case he leaves the stage a husk, emotionally exhausted. He is gentle and warm, passionate, energetic, electrifying, resolute, and committed.

And then in a split second when the music is over and the applause rings around, he leaps up smiling appreciatively to all around him, gesturing to pianist Benjamin Powell to take a bow first.

He like Jess Gillam hours before at Ryedale is part of a generation of performers for whom concerts demand careful curation – musical excursions where one musical performance must lead into the next aurally. The days of musicological connections known only to the studious few are long gone. In its place, sounds-based playlisting delivered by powerful communicators.

Selaocoe began with a personal improvisation based on his own family poem combining ankle percussion (I’m sorry Abel – I’ve no idea what that was around your ankle), and a range of vocal treatments that acted as rallying cry. This prepared the way for Debussy’s Cello Concerto, two caprices by Dall’ Abbaco, some Ravel, Schehedrin In the Style of Albeniz, and James MacMillan’s deeply personal, reflective and consoling ‘Kiss on Wood’. Another improvisation concluded the evening.

An incredible hour and fifteen minutes of personally driven music in the ballroom of a country house in the middle of the North Yorkshire countryside that completely knocked me for six. This was music that seemed to pour from Selaocoe in an otherworldly kind of way.

If you have a chance to see him play live, you must. And if you possibly can be sure to be sat close to the stage.