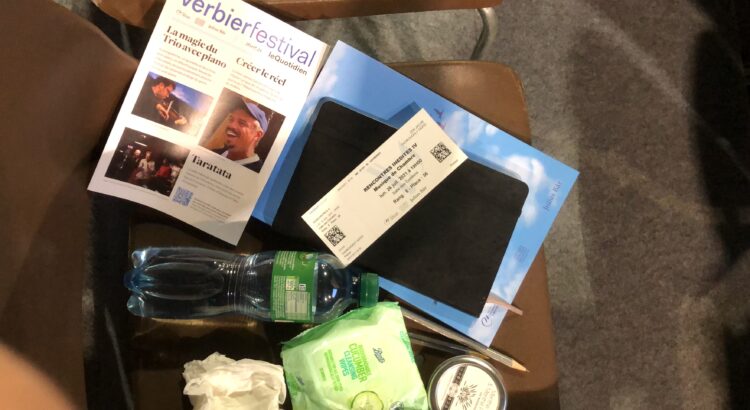 I get that COVID has been bad for travel and airports and that. But why are there queues at check-in. Why? They’re only checking an extra bit of paper – to make sure people are double vaccinated.

Maybe it’s just teething troubles. Maybe it will iron itself out.

After waiting for an hour and ten minutes (and I got there at 5.30am) to get my paperwork checked, the rest of Terminal 2 was eerily quiet. Security people looked a little surprised or maybe even relieved to see me and the handful of others who passed through scanners. Poor loves.

Some things have changed in airport procedures, I notice.

For example, there’s now no need to put that poncy plastic toiletries bag separately in the tray. I was mildly discombobulated by this. Had to keep checking with the security bloke. He just waved me through eventually. And on the plane, the pochette contained hand sanitiser impregnated cloth is overwhelmingly effective judging by the state of my head after I’d finished wiping my hands. It appears I’ve found the acceptable way of imbibing before midday and with minimal impact on the liver. The way forward.

Now that Brexit is done I realise that I’m glaring at the EU queue at passport control at Geneva Airport. It’s much shorter. Us dregs have in comparison to wait a considerable time to get seen. Thanks Mr Farage.

But what this means is that I unwittingly overhear an artist in the Verbier Festival who was on the same flight commenting to a pal in the queue on how ‘If I do meet X at the festival I hope she’s not something completely different in real life. I’m not sure I could deal with that.’ (where ‘X’ refers to a classical music artist whose name I didn’t quite catch).

It reminded me how performers have their vulnerabilities and how readily us as audience members forget that performers are humans too like us. Just humans who are better at their scales and arpeggios than we are.

On to Verbier via two air-conditioned trains from Geneva to Le Chable via Martigny. I saw no-one on the train or on the various station platforms not wearing masks. The Swiss are it seems very obedient.

On arrival, I’m to go on a short walk down the hill to the COVID test centre in the pharmacy under the Migros supermarket. There a French man is waiting for his test results and overheard me say “Hello, my name is Jon Jacob and I’m here for a COVID test.”

“I predict that you will test negative,” he said to me holding his chin.

“Is that because I’m British?”

I’m not quite sure who had the last laugh. I think he did (and rightly so). Everybody did laugh, even though I wasn’t quite sure who they were laughing at, truth be told.

As it turns out, I did test negative which is A Good Thing. This means I can now return to the UK on Wednesday.

Had it not have been for George the PR (who’s working on the Festival here) cycling up behind me on his electric bike when I headed back to the hotel with my carrier bag of supper, I would have missed the only concert I have tickets for to tonight (and the only one that is on).

(Next time Jon, re-read the schedule you were sent before you headed out. The one you printed?)

George and I confirmed the start time of the concert at 6.32pm. I hot-footed it back to my hotel by 6.37pm, ate a packet of wafer-thin ham, swigged some fizzy water, and then hot-footed it back down the hill juggling a notebook, two pens, facial wipes, water and mints, arriving at the concert venue by 6.55pm. I was in my seat 7.00pm.

Fortunately, both concerts tomorrow night are in the same concert venue so at least I know what the latest time I can leave it before heading off.