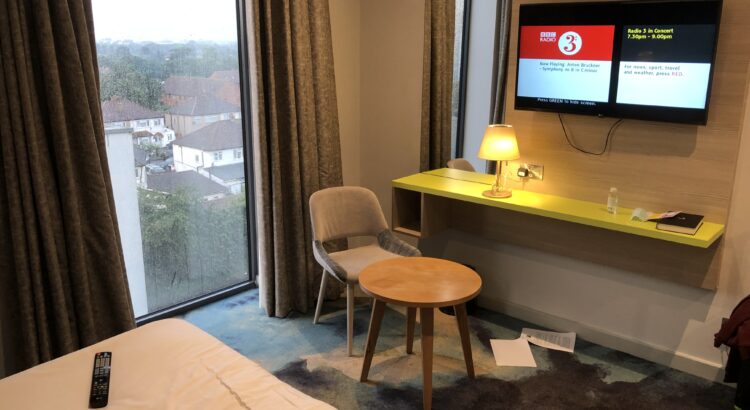 Bruckner 8 on Radio 3, later Barry Humphries talking about Jack Hylton on Radio 2. And after that Stunning Soloists at the BBC. Bruckner 8 is the surprising discovery. Not heard it before. The brass at the beginning of the final movement is electrifying. Packed full of drama. And as a complete work so much more satisfying than his fifth symphony which always feels like it just goes on and on.

I’m staying the night at Ibis Styles (I’m paying) before I head off to Verbier for a few days to go to the Festival there. I’ve come to Heathrow the night before because a) its a reasonably early flight b) it takes two hours to get from Lewisham to Heathrow and c) I’d rather do the journey the night before than the day of the flight, not least because d) Swiss Air advise passengers to be at the airport three hours before take off.

It’s the first time out of the country since October 2019 when I went to Yerevan to see the World Symphony Orchestra perform some music created by artificial intelligence (no great threat to any real-life composers) and a global medley. Back then it was the closest I’d been to musicians during rehearsal and the closest any musicians I know had been sat next to each other. It was an exhilerating trip. I’ve missed travel.

At the same time there’s a smidgen of guilt floating around. Budgets are tighter (inevitably) and instead of the usual three nights, this year it’s two. I’m in no way complaining about that. I quite understand. I’m grateful for any opportunity to break out of the usual surroundings to hear music in a different location. But I’m mindful that heading out of the UK for two nights to hear live music I could just as easily watch online could be seen not only an indulgence but a little foolhardy the state of things at the moment. (That said arrangements are tight what paperwork and testing and wotnot.)

So why go? Why not stay home? The answer is easier to answer after this past 14 months or so. During this time which I’ve been working with a coach to work out what ‘Thoroughly Good’ is, what my connection with it is, and what I want to do with it next. Essentially, what’s the plan for Thoroughly Good? How do I take this further?

TG started as a personal blog back in the black and white days of 2005. But sixteen years later it feels (even it doesn’t appear so) rather different. When I left the BBC back in 2017, I was surprised by its usefulness. I was amazed that people wrote to me about possible things to feature on it. In those heady first days of self-employment I began to realise that actually it was possibly a little more than just a personal blog.

The conclusion I’ve come to now is that Thoroughly Good as a destination or a brand or a name (however you want to term it) is something that advocates classical music in all its forms, or at least as many as possible. And that it does it in a way that is authentic and sincere with the sole aim of selling the joys of the genre to those who wouldn’t otherwise consider listening to it.

But what I’ve also come to realise is that I just want to be able to bring the things that I love into everyday conversation. I don’t want to dumb it down, simplify, avoid language just because of a falsely held assumption that people are put off by passion. I want to lead with passion, documenting the music that moves me and the classical music experiences that define and continue to influence me.

The reason I love jazz-funk is because of an old university friend introducing me to it whose enthusiasm for it was unequivocal. The reason I love the music of Sondheim is because my partner introduced me to it with a similar level of enthusiasm. And if it is that I only need to hear an author talk about the book they’ve written – the world they’ve created – that I end up wanting to read it, then why on earth can’t the same be done with classical music?

And that means hearing it live. That means soaking up the atmosphere created by the performers and the audience in different spaces. Sometimes that means heading out of London.

It also means talking about the music and musical experiences in a language that is true to me and might possibly resonate with others. It’s not as I’ve heard people in reasonably powerful positions in the media say to me a case of ‘the music should stand on its own two feet’ and ‘if we talk about music too much we’ll put people off’. Talk about the thing you love and others will love it too. That’s what I’ve come to realise these past fourteen months.

None of this is new especially. There have been elements of what I’ve been doing that have demonstrated this sense of purpose. I just haven’t really seen it until now. In fact, if I’m to be completely honest the imposter syndrome has got in the way for years.

For far too long I’ve accepted the thinly veiled criticism that if your publication has the word ‘blog’ in it then no one is going to take it seriously. I don’t think that now. Or at least I’m far more at ease saying that this is no longer a hobby, but a business. I see Thoroughly Good in its free-to-access forms like the blog or podcast as part of a massive marketing and PR strategy. Why wouldn’t you persist with a content stream if it means that it helps create opportunities?

And if ever there was a time to start documenting that experience so that newcomers might consider attending a live event or listening to a recording of something unfamiliar then its now, just as concerts are returning. It serves the classical music sector and it might just point a newcomer on a new journey of discovery.