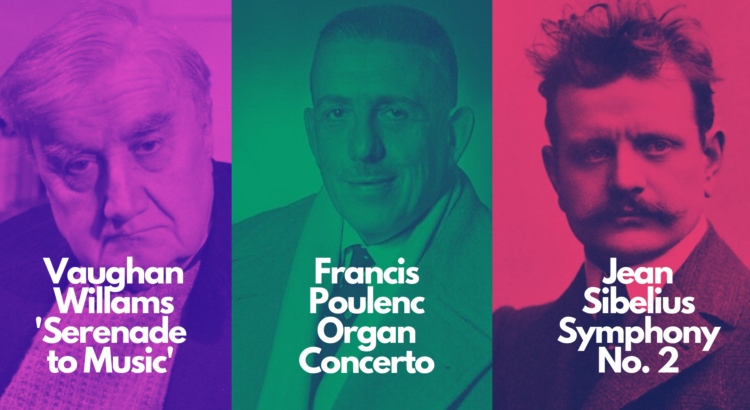 Some handy signposts follow for anyone who’s a newcomer to this stuff. It’s all cracking music. Worth flagging that there’s nothing on the new piece by James MacMillan because obviously it hasn’t been played yet.

Written by the same composer as The Lark Ascending, this fifteen-minute piece for orchestra and vocal soloists. It’s a ravishing musical statement – what is often referred to as ‘English’ sounding though that terminology is a little problematic these days. The title refers to the text which was adapted before being set to music in this piece – a discussion about music in Shakespeare’s Merchant of Venice. It is a soothing musical balm to open the BBC Proms season after a year of turmoil – an apt choice reasserting why this music matters. Listen out for the glorious climax around halfway through. You’re allowed to cry a bit here. It’s also OK not to cry, just so we’re clear.

Vaughan Williams wrote this as a celebration of conductor Henry Wood’s 50 years as a conductor in 1938. It was premiered in the Royal Albert Hall in October 1938, less than a year before the outbreak of the Second World War.

Soloist Elizabeth Llewellyn who features in tonight’s performance has also featured on the Thoroughly Good Classical Music Podcast and used to work in IT before she became a professional singer.

Written in 1938, the same year as Vaughan Williams ‘Serenade to Music’ – think about the different sound world here compared to VW. Twenty minutes long and made up of contrasting musical ideas. Lots of theatre.

Terrifying chords from the organ open the first movement before things resolving into something a little more romantic sounding from the strings in the orchestra.

Once that portentous opening is over things shift into more of Keystone Cops feel. If you’re looking to be chased by dastardly evil villain, this would be the music, wouldn’t it?

Something softer and little more comforting follows. The musical equivalent of the best mattress and the perfect soft downy duvet. Though not for too long as the peril returns followed by some cracking chords in the organ.

What follows is (for those of us who love a bit of a melodramatic montage) another chase – scurrying industry played out between the organ and strings on the stage. Cracking stuff. Move over Andrew Lloyd Webber, this is the music the Phantom really wanted.

A romantic escape follows in the next sequence. Sweet nothings are being whispered in somebody’s ear. Wobbly knees abound (if you like that kind of thing).

Doom and portent returns momentarily before a little more comedy montage music returns – a sort of Miss Marple chase conducted as a reasonably fast trot. Eventually the steam runs out and the doom laden chords return ushering a church like feel for the final movement.

If you’re liking Poulenc’s music here, be sure to listen to his Concerto for Two Pianos which is rip-roaring fun. No, really. It is.

A musical evocation of Finnish national pride. Right from the start the warm strings and perky oboe and clarinet solo evoke a Finnish pastoral scene. What follows throughout the four movements of around 45 minutes is a struggle that concludes with a bracing sense of triumph and an all important ‘amen conclusion’.

The symphony was premiered in 1902 conducted by the composer at a time of heightened tension between Finland and Russia.

The second movement has a dark quality to it opening with plucked strings and a haunting hypnotic bassoon solo. A series of bold statements follow. Heart on the sleeve stuff.

The third movement is frenetic with scurrying strings; a contrasting sedate section follows offering a breather from the frenzy – a musical lay-by if you’re in need of a metaphor. When that section returns again it builds to a ravishing triumphant opening to the fourth and final movement that will make you go all teary eyed (assuming you’re not a cold-hearted bastard, and you might be). You get another stab at the highly emotional bit around seven minutes in.

If you’re looking for a good recording of this, Thoroughly Good recommends Bernstein conducting the New York Philharmonic. Lots of detail that places you in the heart of the action.