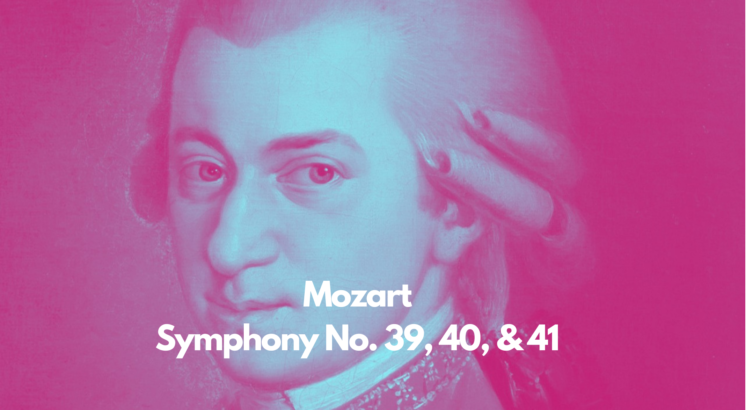 Born in 1756 and dead by 1791, Wolfgang Amadeus Mozart packed in a lot to his short life. Taken on a tour of Europe (taking in London en-route) by his father. By the time he died Mozart had written 24 piano concertos, 5 violin concertos, 22 operas and 41 (some scholars say 40) symphonies amongst a slew of other religious, secular and instrumental works.

Mozart wrote symphonies 38,49 and 41 – the last he wrote – in 1788. So, musically speaking, these works go some way to illustrate the extent to which Mozart had developed as a composer.

They are remarkable for the amount of invention and development – the way in which he takes a simple melodic idea heard at the beginning of each movement and develops that idea through various key changes and textures is stunning. It’s also something which is so familiar a sound and so entertaining to listen to that its constituent parts could easily go overlooked.

What is a symphony?

A big question that demands a long answer. But there’s no time for that now. Put at its simplest, it’s a series of separate pieces of music (usually four) which are contrasting in style, but unified around a musical key or repeating musical idea. At the same time as Mozart, the ‘Father of the Symphony’ Joseph Haydn was also writing symphonies though these were often much shorter in length. Symphonies written after Mozart’s death by Beethoven, Brahms and Mahler for example took on a much more epic scale.

Listen out in particular for the final rip-roaring movement for an illustration of melodic invention built around one recurring musical and rhythmic idea. You’d think you’d tire of hearing it repeated over and over again. You won’t because Mozart is brilliant at varying it in ever more entertaining ways.

The opening movement of Symphony No. 40 contains one of Mozart’s most famous tunes, underpinned by simmering string accompaniment.

The second movement has a stately dance feel to it throughout and takes the listener through a variety of musical keys of different colours that has the effect of subverting expectations and maintaining attention. It is a remarkable creation full of grace and poise.

The third movement breaks down into two contrasting sections, first a dramatic fast-paced swirling dance, the second a variation on the original musical idea but with an altogether smoother feel to proceedings. The first section returns to conclude the movement.

The concluding movement is tightly controlled and well-executed mayhem – a rollercoaster musical ride full of thrills and spills at every turn. Exactly the kind of music to have when something urgent needs doing. Exhilerating stuff.

Full transparency: Symphony No. 41 is Thoroughly Good Favourite because of the richness of its sound built with contrasting wind and string textures. It also packs a punch in terms of contrasting musical ideas and complexities. Listen out for the variety of melodic ideas in the first movement alone. There’s even an operatic feel to some of the melodies in places.

Hold on tight for the rollicking joyous celebration in the fourth movement that starts with a seemingly low-key idea in the strings before opening out two bars later to include the entire orchestra in a blaze of exuberance.

Also, about five minutes keep an ear out for a series of jaw-dropping ‘chromatic’ notes where the melody seems to slide up and up. These are surprises and scrunchy and utterly gorgeous (if you like that kind of thing).

Towards the end, there’s what’s known as a ‘fugue’. Fugues are, no word of a lie, gripping musical wonders created when one musical idea is played by successive instruments to build a bigger whole. Put like that it sounds a bit shit, but go with it. It’s a treat.

Why is Symphony No. 41 nicknamed the ‘Jupiter’?

The nickname ‘Jupiter’ was applied to Symphony No. 41 allegedly by German violinist and impresario Johann Peter Salamon when he put on a performance of Mozart’s Symphony No. 41 in London in 1821. The nickname is a reference to Jupiter, the chief god of the Roman pantheon.

Recommended recording of Mozart’s Symphony No. 39, 40 and 41

There are A LOT of recordings of Mozart’s music. So whilst this is a Thoroughly Good Recommendation its not necessarily or the best. It’s just a Thoroughly Good one. It a live performance of the Australian Chamber Orchestra performing all three symphonies. They especially give it some welly in the final movement of Symphony No. 41. Very pleasing.