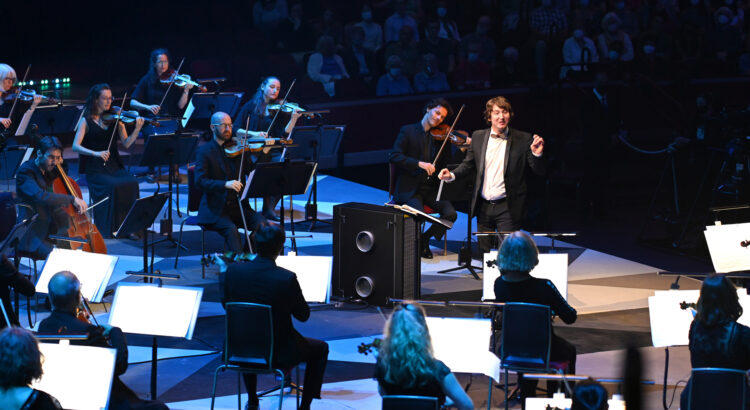 Radio still thrives, and television coverage has been afforded the opportunity to get some gratifying wide shots. But is the televisual refresh at the expense of available space for Prommers?

It is without doubt a joyous thing to have the Proms back. I’ve been attending for thirty years in one way or another. On that basis it’s assumed the status of an old friend. Always there, even if at times I didn’t always understand why it was doing what it was doing or saying. The fact is it’s here and it’s on snd that’s a relief. Seeing the interior of the Royal Albert Hall brings back memories which are in themselves part of my ongoing Proms experience. And that is much-appreciated.

Seeing and hearing familiar faces and voices – Derham, Klein, Trelawny et al. – reinforces that feeling too. After a year of uncertainty, the restoration of something that has provided continuity real and perceived also gets a big tick from me. I suspect a global pandemic abs something being ‘taken away’ has the inevitable consequence of resetting priorities.

There have been mildly painful observations that have at first brought about some unease. A Proms pal of old (who would normally be in attendance at the First Night drew attention to the barren arena. Usually packed with people, this year the space was bare. A closer look revealed a slightly different layout to what has over the years become a very middle-class kind of mosh-pit. The distance between the prommers and the stage has widened (so too the stage to accommodate the distanced orchestra). There seems to be a physical divider between the back row of the prommers and the rest of the arena. Behind which appears at a distance to be an empty space. In fairness its a little difficult to say with any certainty about the amount the floor has been reduced by, but I’m an edgy kind of chap. If I wasn’t, I wouldn’t be writing this after all.

Does this appear that the insistence of proof of immunity or vaccination wasn’t enough to pull in the crowds for the First Night. Is that a sign of the times? Is it also a hint of future times too? When I thought about it, I was surprised how much I apparently needed to see the Prommers there. The jigsaw isn’t complete until they’re all there.

The flip side is, I realised after an emergency meeting with myself, television’s advantage. A much deeper stage (and taking over part of the arena – hence the seemingly empty space) means that a boom can face the stage full-on, getting shots of the orchestra usually only possible from the side. This makes for TV’s equivalent of immersive shots, bringing the music alive and giving proceedings a refresh.

There’s an argument that says that had the global pandemic not happened, the management’s fear of those Prommers who cling on to convention like a barnacle stuck Peter Grimes fishing boat would have made a radical shifting of TV equipment a difficult change to implement.

What the change underlines is where the priorities should lie (something highlighted in numerous digital streams across the year), with the performance. What I sought to watch on Friday and Sunday wasn’t chit-chat (sorry Katie and Tom) but the music.

And broadcasters are only too aware that what they’re competing with is on-demand music streaming. In the run-up to its centenary year, it makes perfect sense for the BBC to be prioritising the capturing of performance. That’s where it can create the most value from its core content now and in the future. Those interstitial moments are (I’m sorry again Katie and Tom) the stuff that will end up edited out.

Radio still thrives. I heard Petroc Trelawny’s interval feature with a Hollywood musical expert either recorded as live with audience ambiance underneath or done actually live. If the latter then it was invigorating live broadcasting. A reminder that radio triggers the imagination in a way that TV relays (deferred or otherwise) often crush.

The overriding question for me is whether this signals the gradual decline of the Prommers arena space. At some point, the stage will return to its normal size, won’t it? I can’t see TV producers nodding to management in the future and saying ‘Yeah OK, we’ll go back to what we were doing’. TV isn’t generally like that. So, given that the Prom tickets aren’t exactly a massive revenue driver (say a maximum of 500 people at £6 each), is the Promming area even worth the hassle? Has COVID given an opportunity to usher in a big change, or at least begin the transition?

The answer to that is to know whether whether the BBC would be happy to ditch one of the defining characteristics of a Proms performance in a a flagship global product during its centenary year next year. I hope not.