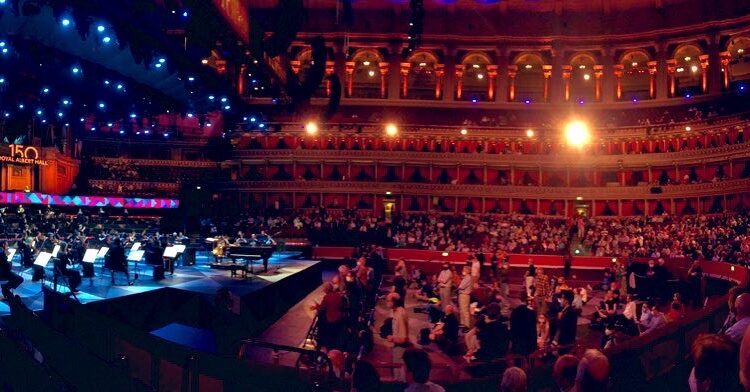 A high point of the BBC Philharmonic’s first outing at the BBC Proms this year was the orchestra’s performance of Beethoven’s fourth symphony. Packed full of detailed, precise and clear articulation, the dry whispering strings, warm wind and brass, and punchy timpani-line really exploited the cavernous interior of the Royal Albert Hall. This felt like a theatrical performance, with an occasional spotlight on highly complex musical lines like the terrifying bassoon solos in the last movement. The performance had a youthful and uplifting feel too, in a way I hadn’t really noticed in Beethoven’s fourth symphony before. An odd thing to admit to I know: I’ve heard this work many times before – it’s not like the musical material itself had changed, so what instead was different about this performance?

Proximity to the stage no doubt played a big part. With the stage extended to accommodate a distanced orchestra, The ‘H’ section in the stalls of the Royal Albert Hall is, bar a handful of seats to my left, basically like being on stage with the musicians, making the listening experience feel more immersive than any Promming experience in the past ten years.

There’s also the empty space in the Royal Albert Hall which adds to the atmosphere. The auditorium seating wraps around a large central space extending from floor to mushroomed-ceiling. Sound reverberates off the hard surfaces and rests in that space, giving the music a sense of depth I often forget about after an extended period away from the hall. Usually that period away amounts to say 9 months. This time it was a 18-month hiatus. Little wonder the senses were enlivened on this visit.

But perhaps more potent was things that were ever so slightly different from normal.

The top-level circle near to the arena – usually full for something like a Beethoven, Mozart and Haydn programme – was entirely empty all around the hall. Some heads popped up in the boxes; up in the gallery above, I counted three or four people. In the Arena (no TV so the equipment was gone and the Prommers were able to extend to their full-ish space) there was maybe a maximum of 100 people, with considerable gaps in between each line.

I explained to my partner how these seemingly insignificant observations actually made me feel unsettled. Put very simply, “It’s like when you see someone who’s dyed their hair just that wrong shade of brown for the colour of their skin and your brain can’t quite work out what’s wrong and also can’t stop staring whilst it tries to work it out.”

There was a sense that things weren’t quite right yet. We’ve got access. We’ve got our live musicians and the musicians have got some of their audience. But without the tourists, and the people dropping in for a concert after work, or the students, or the retirees, and the fundraisers shouting out their running total for Help Musicians UK, we’re missing a few pieces in the jigsaw. There was a party on but not all of the invitees felt able to attend. And I missed them. Everyone in the auditorium is as important to me as those on the stage.

Physical space, ambience, and the absence of others created a theatrical backdrop for the BBC Philharmonic’s performance of Beethoven’s fourth symphony. There was poignancy in the background and youthful exuberance in the foreground. And whilst it was utterly fantastic to be back wandering the corridors of the Royal Albert Hall, without more people present some of the buzz is lacking at the moment. It’s like Tim Woodall – former Marketing Director at the Philharmonia – tweeted on the First Night, “Got to be patient.”