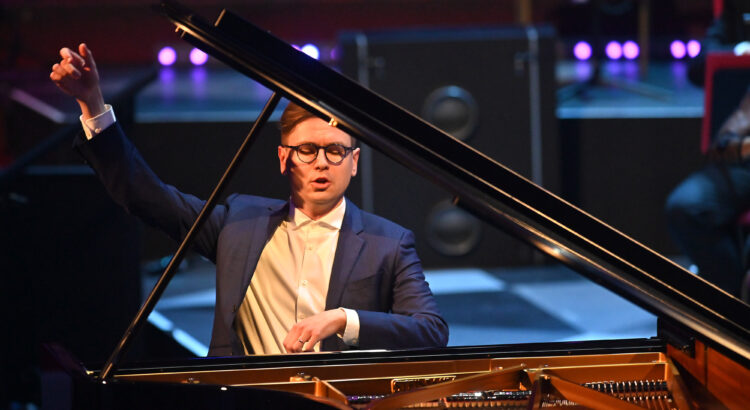 Víkingur Ólafsson’s sizzling performance of Mozart Piano Concerto No.24 needs a quick noting down in the journal.

The detail in Víkingur Ólafsson’s playing itself I enjoyed most was most evident in the first movement where the piano part wasn’t always the dominant voice. That meant we got to hear alternative or ‘lesser-heard’ voices given more attention. There were many times when the piano, in particular the right-hand upper notes, were reduced in volume by Ólafsson, giving more prominence to the flute in some places.

And in one sequence clipped below it was being able to hear a melodic line in the ‘middle’ of the piano that really took me (pleasantly) by surprise, almost as though Olafsson had lifted the bonnet of the car he was driving and was pointing excitedly at the fuel injector.

There’s a directness or firmness to Ólafsson’s tone too which I’ve not heard in a performance of this concerto. And I rather like that too. The Guardian’s Andrew Clements didn’t agree who described the performance as ‘bizarrely anachronistic’.

Tthe listening path is worth documenting too. I watched first on TV. Josie D’Arby is by far the best Proms presenter on TV (sorry Katie, Tom and Jess), achieving that rare balance of authority, accessibility, sincerity and warmth. The audio felt as though it battled for my attention with the visuals so I didn’t really pick up on the detail in the playing (it was the Stradal arrangement of a Bach Organ Sonata that worked best on TV). It was only later listening to the radio broadcast I got to the detail in the sound production.

It’s the second time in a week that actively ‘leaning in’ to the detail in a live broadcast has brought me out of a motivation-less fug. It is by listening for detail that my mood is transformed, resulting in renewed impetus (hence the post about Thoroughly Good in a Nutshell). That merely listening in a focused way can have this transformative effect is another reminder of how I draw so much value from this genre.

Listen to Víkingur Ólafsson with the Philharmonia and Paavo Järvi playing Mozart’s Piano Concerto No. 24 in C minor via BBC Sounds.