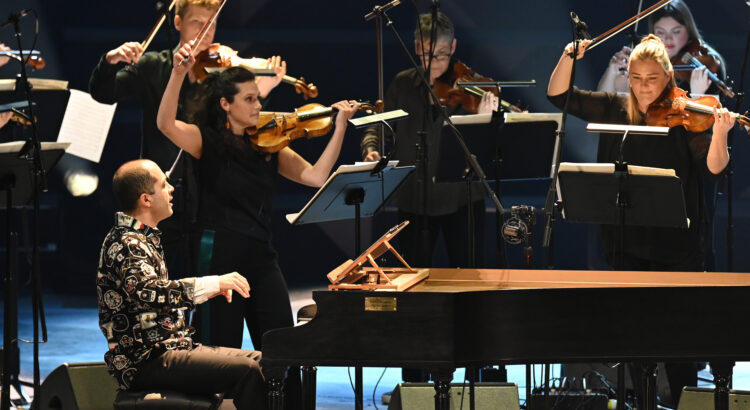 An epic night. Wild rhythms and visceral textures from the Manchester Collective – their debut at the BBC Proms – and Mahan Esfahani. Listening to the broadcast felt like earwigging a textbook Proms gig, the kind where excitement and anticipation spill out from stage and auditorium, evident too online.

That excitement is in no small part down to the sincerity of the offer Manchester Collective consistently brings – a reflection of founders Adam Szabo and Raki Singh vision evident right from the start of their creative endeavour. There is integrity and authenticity to their work which results in them creating concert experiences that are fascinating and compelling. There was a sense that those I knew in attendance in the hall were there to witness a significant milestone in the group’s five years of existence.

Three standout performances in this Prom picked out below with illustrative clips.

There was a rock-gig feel to Mahan Esfahani’s keyboard work in Gorecki’s Harpischord Concerto, the music of which holds absolutely no prisoners with a driving incessant rhythm. The rust-like feel in the combined textures of harpischord and strings gave proceedings a creepy edge. The frenzied cacophony had a tinge of madness about it that was magnetic and repellant. Music that brings about strong contradictory emotions. Efficient writing. Electrifying playing.

I studied Joseph Horovitz’s Sonatina for Clarinet when I was a student and loved his playfully light combination of classical and jazz. The same approach is evident in his Jazz Concerto for Harpishord and Strings, only this work has all of those trademark elements of Horovitz’s musical language really ramped up. None more so than in the final movement (opening clipped above) when the harpsichord lets rip, fingers crawling up and down the keyboard with all sorts of unexpected chromatic notes that theoretically shouldn’t be there but fit the bill for those who see a cranky miraculous world only just hanging together.

Especially captivating in Manchester Collective’s encore Orawa by Polish composer Kilar was the extreme textural contrasts, heard in this clip at 7 seconds in.

I adored the dry sequences that seemed to favour a percussive textural effect over any discernible pitch, a texture I wanted to carry on indefinitely even though I knew it couldn’t – the musical equivalent of wanting to devour an entire family bag of your crisps after you’ve taken just one bite.

Be sure to watch the Australian Chamber Orchestra’s equally compelling lockdown recording of the piece (below) published last year.

Listen to the Manchester Collective Prom via BBC Sounds