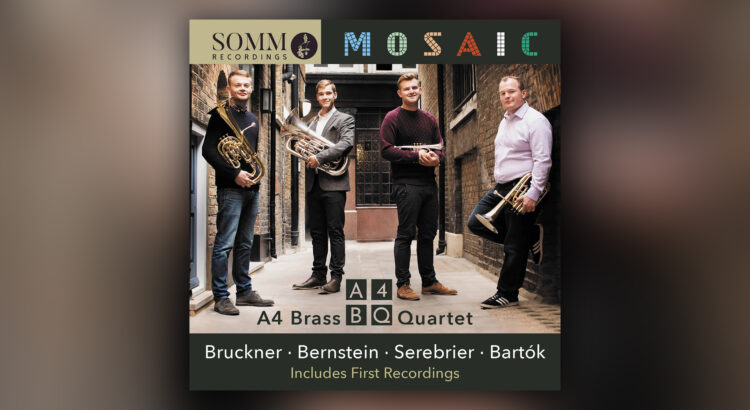 The A4 Brass Quartet further consolidate their competition and commissioning success with a second album released last week, this time on the SOMM label.

A4 Brass Quartet combines dazzling technique, a mix of new works and arrangements of popular classics, in an album that illustrates what makes the group the exciting brass ensemble they are.

Bates follow-up to his blistering Toccata (in the quartet’s first album Mists of the Mountains), takes all four players on a fierce 2’24” demonstration of their collective techniques. Spoiler: Bates clearly loves to challenge his colleagues almost to the extent that it appears as a sport.

If you’re looking for a lighter demonstration of the quartet’s spectacular technique, then Bramwell Tovey’s fourth end-of-the-pier-sounding ‘Street Song’ entitled ‘Very Fast Indeed’ amounts to the listener holding their breath for 2’33” whilst Bates, Robertson, Smith and Cavanagh do all manner of leaps and bounds simply for your delight and delectation.

Amidst all of this two particular points to pull out from the recording that really resonate.

First, there’s an unfussiness to A4 Brass Quartet’s sound production that steers them away from any sentimentalising of the brass ensemble sound.

This is most evident in Elgar’s Salut D’Amour and may well be down to there being only four voices. Similarly in Berstein’s Candide – no easy feat given the full orchestral scoring in the original – the players summon a whole range of colours, percussive imitation, and dynamics and through swift and seemingly effortless speed changes give a rich spirited rendition of the popular operatic overture.

And second, is the most magical moment of the entire album is one carefully placed chord at the beginning of the final verse of Bruckner’s Locus Iste (arranged by Chris Roberston). Brilliant ensemble work which I suspect was recorded live (as what follows is the tiniest of wobbles that make everything ‘feel’ even more live).

It’s a great achievement for the 2018 Royal Overseas League Chamber Music winners who now work regularly with Live Music Now and Music in Care Homes. The album is funded by City Music Foundation who supports musicians moving from educational to professional lives.