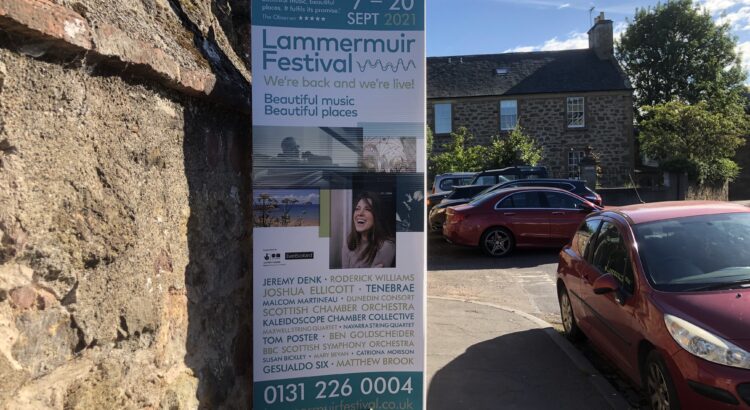 “Are you reviewing the concert?” asked horn player Ben Goldscheider looking at the notes in my hand.

“Well,” I replied heistantly, “I don’t like to call it reviewing. Not really.”

This often happens. I notice that if I talk to a musician I’ve heard play, then a boundary has been crossed.

Before the question was asked, me and the musician were either side of a stout fence. From my side it’s easier to refer to the performer in the third person, much much easier to discuss what impact their work had on me in the moment of performance. I can wax lyrical without fear of blushing.

Mentioning the review word is the equivalent of leaving the garden gate open. Someone strolls in takes a look around, passes small talk and then, all of a sudden you’re suddenly feeling really self-conscious about the state of the flower bed.

For someone who seeks to bring audience and performer closer together, this momentary self-consciousness is unsettling. What’s apparent to me now is that in a lot of instances, maintaining the distance between listener and musician is crucial.

Except for those occasions when there’s no need. Like with the Kaleidoscope Chamber Collective who are, it seems, no different on-stage as off.

A musical collective built on values we need right now

Ben Goldscheider is one of a handful of musicians who appears as part of the Kaleidoscope Chamber Collective.

Kaleidoscope – a creative endeavour that uses this country’s greatest exponents of chamber music to mitigate our fractured cultural experience – is the work of pianist Tom Poster and his partner Elena Urioste.

It’s textbook Poster, who early subscribers to the Thoroughly Good Classical Music Podcast may recall appeared in the very first episode with pianist Christina McMaster. I recall Tom being a generous sort, quite at ease accommodate my nervous energy, compensating for my lack of knowledge with grace and good humour.

It turns out he’s the same on stage. And he’s ridiculously nimble at the keyboard, making light work of considerable demands of a whole range of repertoire he’s played with his Lammermuir collective: Mozart, to Glinka, to Beethoven, new music from Mark Simpson, plus a blisteringly intense E-Flat major horn trio with Magnus Johnston and Ben Goldscheider.

Kaleidoscope delights because it’s a collective of musicians, all of them soloists in their right; individuals at a range of different stages in their career, all of whom bring different personalities and remarkable levels of energy to the stage. There’s a rock band vibe too. All playing their distinct role in creating the whole in whatever configuration is called upon.

At the risk of fanboying here, I was transfixed.

In the Sonata for clarinet and bassoon by Poulenc, the theatrical interplay between her and Mark Simpson was swift and crisp. In the Larghetto in Mozart’s Piano and Wind Quintet in E-Flat Major, her solid and rich sound added an emotional depth to the resulting ensemble that really took me by surprise in the moment.

It is in these moments in particular that the mask audience members are still required to wear in concert spaces is irksome, especially when the performers are happy exchanging smiles with one another as they perform. In the Mozart Piano and Wind Quintet especially, the looks exchanged only enhanced the high-quality playing. In these moments an audience wants to participate in the performance themselves by throwing a look of appreciation. I remain unconvinced I am able to do that with my eyes alone.

Huw Watkins Lament written for Ben Goldscheider, which forms part of the horn player’s tribute to the legendary Dennis Brain, was a touching, sometimes painful, antidote to the breeziness of Mozart’s score. And, interestingly, not inspired by Dennis Brain, but by the collective sense of loss many of us experienced during the first months of the pandemic.

French composer Germane Tailleferre was new to me. Unsurprising perhaps. She was born in 1892, died in 1983. Sonate champetre drew on folk song and applied playful neo-classical quirkiness with verve, bounce and delight. The second movement Andantino had a refreshing pastoral air about it created by high notes in the bassoon and oboe. The third movement, under the fingers of oboist Arman Djikoloum, clarinettist Mark Simpson, Amy Harman, and Tom Poster, seemed like a twinkling waterfall of sound (if you can possibly conjur up such an image) which in the acoustic of Dunbar’s Parish Church acoustic rang around to great effect. The work needs to be recorded. Or at least a recording of it (if it exists) needs to be made more findable.

Amongst all of this, a contemporary piece from Mark Simpson – Echoes and Embers for piano and clarinet, deftly introduced by the clarinettist as an exploration of the ambiguity between the two. In musical terms, this meant making it difficult to discern which was a clarinet line and what was emanating from the piano. The creative force that emanated from both Poster and Simpson in the moment was incredible, humbling, and deeply moving.

For me there’s something fascinating about Simpson in particular. The urgent confidence with which he plays and speaks makes him a magnetic presence on stage is one thing. Another is his multi-faceted creativity (he’s currently in the process of penning a piece for Ben Golscheider to premiere at the Barbican next week). This makes him more than an interpreter but an enabler, someone with the ability, the means and the connections to feed and sustain a network.

The day I leave Haddington the Kaleidoscope are billed for their second and final performance in the Lammermuir Festival.

I sit in the hotel restaurant peering at the black pudding, potato cake and locally sourced sausage on the plate, noting that just as Ben Goldscheider had advised in our podcast interview sound check the day before that the poached eggs do look rather good and that is in itself quite surprising.

In walks Tom Poster post-shower looking intently at his phone. He sits down and orders his breakfast (he hesitates over tea or coffee, finally settling on tea). Shortly after Amy Harman arrives and takes her seat. And after that Ben arrives.

None of them have seen me. Or at least I don’t think so. I feel momentarily relieved.

Musicians off-duty are people I want to avoid. They’ve only just woken up, after all. They have a big day of work ahead of them – not like me who just has to sit on a train home and scirbble down his thoughts. By sitting here I run the risk of overhearing their conversation and I don’t want to do that. I want them to feel free to be off-duty. I don’t want to ruin their day by my presence.

What’s apparent is that what is evident on stage is evident at breakfast. Goldscheider is generous, charmingly and polite; Poster is warm and inviting; Harman effervescent and ebouilliant, even at seven thirty in the morning. The reason they and their colleagues are so brilliant in performance is because they are so wholly authentic. People to learn from. No wonder Kaleidoscope was set up.

Music has found these individuals and found a natural home, given them a second voice with which to express themselves and, in the process, brought joy to a whole lot other people.

The Lammermuir Festival continues until 20 September 2021, with a Secret Places Festival in November 2021, and even something afoot for January 2022.