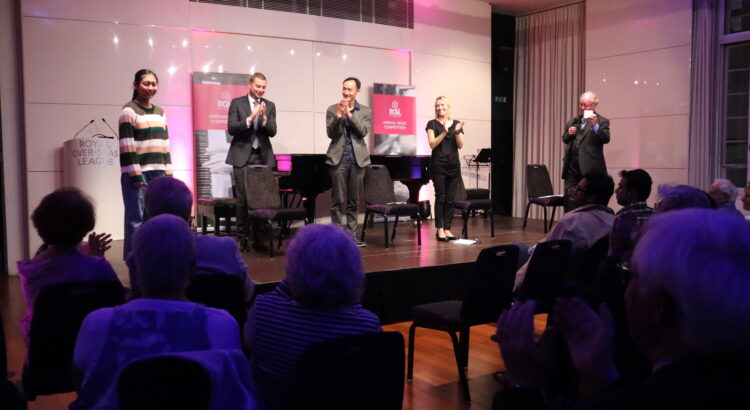 A tardy post about an event I attended earlier in the week – the first of a series of six competition finals staged by the Royal Overseas League in London. The competition is now in its 69th year.

There was a sense that things were back to normal. No masks. Chit chat. Hubbub. And the opportunity to rub shoulders with musicians and punters alike. Varying ages. A warm convivial atmosphere. Royal Overseas League has an easy charm about it without being too up itself, plus there’s the modest grandeur gives proceedings a bit of a sense of ocassion.

As is often the case in these situations, I failed to pick the winner form the four person line up. All provided comeplling cases for proceeding to the Gold Medal Final in November. I enjoyed  Aaron Akugbo’s depiction of a musician getting increasingly frustrated over performances (a wiley recital opener).

Scottish soprano sax players Lewis Banks nudged ahead of the pack by introducing his programme.

My money was on penultimate competitor clarinettist Lewis Graham whose unfussy but precise and rapid articulation was a joy to behold.

The winner was flautist Marie Sato with a programme concluding with Dutilleux. The Royal College of Music graduate and former BBC Young Musician competitor (2016/2018) gets £5000 from the competition plus the chance to compete in the Gold Medal Final in November.

The competition continues every Tuesday for the next six weeks.

Tickets go quickly (the first final was full) at £15 (or £20 if you’re a non-member). Dates and categories listed below.