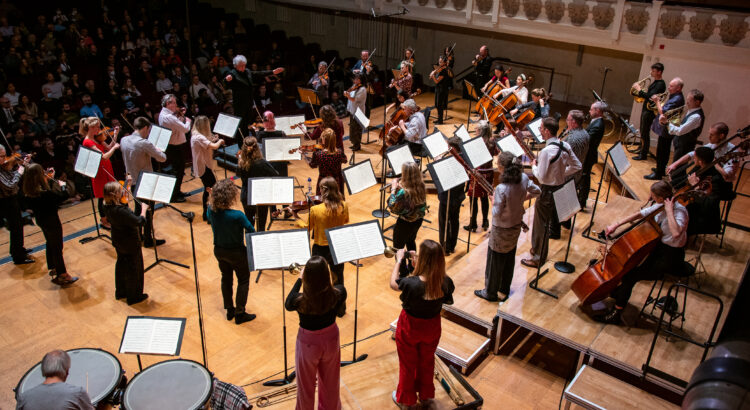 “Every musician who plays with LCO is hand-picked for their professionalism and skill. When our orchestra walks out on stage, we celebrate the individual personalities and backgrounds brought to the performance by those musicians. Each person is a unique and valued ingredient that contributes to a magnificent whole.

A significant part of achieving this is removing the anonymity of a uniform or dress code. We encourage the musicians to reflect the culture they identify with and how they interpret the occasion for which they are performing. This will enable them to be free to perform authentically and enjoy the experience to the full.”

Extending the invitation beyond the platform, Jocelyn said, “We urge our audience to reciprocate. It is crucial that we mirror the community that joins us at our live events and the beautiful variety of people that includes.”

Making an active decision to adopt a different approach to what players and audiences wear is an interesting and unexpectedly invigorating idea. That LCO have seized on it naturally helps them in raising awareness of their individual brand. It’s very LCO too (which makes me like them even more).

But the announcement also reinforces an insight I’ve learned over the past couple of years thanks to the work of Chineke! for example: the first step towards greater inclusion, diversity and representation is to see it illustrated on stage.

It’s an announcement that will no doubt prompt ‘critic’ Norman Lebrecht to reach for his keyboard.

Just this week he’s rattled off more nonsense to add to his growing oeuvre, this time focussing his sights on pianist Yuja Wang and the outfits she chooses to wear in her concert appearances.

Lebrecht’s personal attack on Wang’s appearance hints at something a little more unsettling.

Maybe, I’m thinking, he doesn’t find her as annoying as he professes; maybe privately he has a bit of a thing for her. Maybe we should read instead his critique as the words of an ever-hopeful sugar daddy, a self-proclaimed arbiter of sartorial good taste. “If Yuja Wang were to strip everything right down to the music, I have a feeling she could be a sensation.” Or maybe as one commenter has responded, its an article outlining Lebrecht’s ever-reliable strength of holding the music business to account, a sector that apparently treats her as ‘tinsel’.

This woman has scaled the heights of her industry and is one of the best pianists in the world, and clearly, all she is missing is the opinion of a very mediocre man

What has been interesting over the past twelve hours at least is who has engaged with the tweet I put out last night (flagged by double bass player Leon Bosch over on Facebook late last night). There has undoubtedly been a groundswell (in terms of my account activity) which has been reassuring. But amongst most (though not all) my ‘usual circle’ of friends, fans, artists, colleagues and business contacts, a surprising lack of engagement. It is as though they don’t want to be seen to comment on the content of Lebrecht’s words.

And that got me thinking this afternoon. Why wouldn’t people stand shoulder to shoulder and call this stuff out. Why wouldn’t they amplify a key underlying message that those who have engaged have mostly coalesced around?

The answer might be that they don’t want to be seen to rock the boat.

If classical music has an image problem (I get that this isn’t necessarily a widely held view) then it is quite possibly down to the gatekeepers, commentators, or mediators – those who write and talk about it. The image of the sector is created by those who seek to retain convention and tradition, preserving the live classical music experience as a kind of museum piece. Added to that they communicate another requirement, something I’ve long denied to be the case but find it difficult to ignore now: knowledge is a pre-requisite, so too educational background. If you neither of those then membership of the club is denied. Criticising the way a woman dresses on stage (or a man for that matter – though I imagine you’ll rarely hear that) is the privilege bestowed on those who see it as though prime responsibility to preserve this tradition, increasingly projecting it as irrelevant.

The irony is that the classical music world like that of the wider arts, has embarked on a journey to increase inclusion, representation and diversity in its workforce and its output. It’s not been an easy ride nor is it a journey that is over. By not engaging with criticism of an obviously sexist, misogynistic and ageist piece of twaddle, those with the power to bring about change are not only condoning and legitimising the content of such a view but reinforcing the position the commentator in question has appointed himself to.

If you’re committed to opening up classical music then why on earth wouldn’t you stand up to the person who continues to pedal the stuff that makes your work even more necessary?

The answer, I fear is that the person in question has skilfully created a dependency. The classical music world thinks it needs these kind of commentators, far more than the commentators respect the world on which they commentate.

As long as that goes unchallenged, the longer the problem persists.