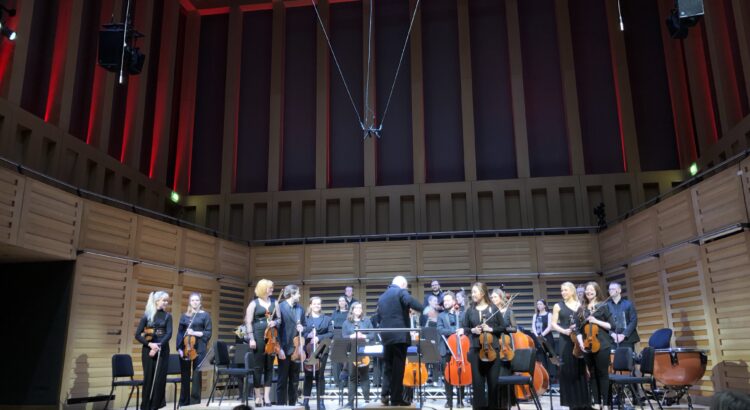 A smaller audience for (what I believe was) the BFO’s second Kings Place appearance, this time with music by Mendelssohn, Florence Price and Alba Rosa Vietor.

In amongst these was a performance of Schumann’s cello concerto given by young Dutch cellist Ella van Poucke.

A commanding and captivating presence on stage, Ella told a compelling story and, importantly, brought the ensemble together with style and panache. Great chemistry was evident between section leaders and soloist throughout. Except for a few under-powered moments in the second movement, it was the concerto where the potential of the BFO in its present guise was made clear. The ensemble was tight, sympathetic, dynamic, supportive and precise.

Vietor’s ‘Symphonic Sketches’ has some really interesting material in it worthy of repeat listens – the final movement ‘Frolics’ is especially fun. But some of the ensemble playing was ragged. Ends of phrases felt uncertain, with some nervy pizzicatos. (One of the front desk players might want to work on a poker face – seeing facial reactions in response to the wind section struggling with intonation was distracting.) The duet encore with cellist Kieran Carter was exquisite – both musicians are a great double act.

Whilst I fully endorse a white knuckle approach to Mendelssohn’s string writing, there were moments where the jeopardy was almost too much in Mendelssohn’s Italian. Varying speeds in the second movement – sometimes the crawling bass felt like it was in danger of letting rip – contributed to a mild sense of unease, though the strings blazed where it mattered most in the final movement saltarello.

I mentioned the print in a previous review, but it’s worth flagging here again. As a curious audience member, I found myself reaching for the programme to explore more about composer Alba Rosa Vietor. There wasn’t much to be found, though there was a considerable amount of the layout given over to the soloist whose biography listed competitions, countries, and artist partnerships. This dearth of space was compounded by an orchestra biography that doesn’t really tell me very much. It is as though the print is serving the orchestra rather than trying to satisfy the audience. Seemingly harsh I know, but the small stuff is important.