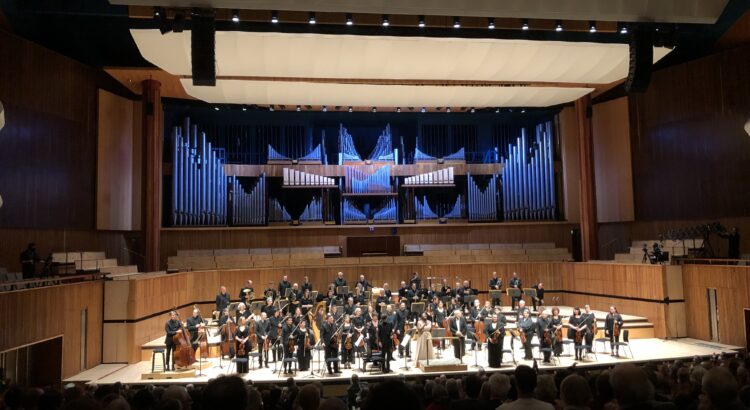 The OAE opened their Mahler 4 concert with conductor Adam Fischer with the adagietto from Mahler’s 5th symphony. Daring, in some respects, to begin proceedings with such poignancy. What they created was both stillness and tension. An opportunity for us in the audience to focus.

Des Knaben Wunderhorn wasn’t without its difficulties initially. The balance between Orchestra and soloist Masabane Cecilia Rangwanasha wasn’t entirely spot on; sometimes it felt like the soprano was having to compete to be heard in Trompeten blasen.

A similar approach was taken to the second half, Fischer preparing us for Mahler 4 with a heartfelt recollection of being a kid sheltering in a bunker during the Hungarian uprising and an exquisite performance of Bach’s ‘Air on a G string’.

I hear most Mahler symphonies live as a kind of theatre played out by musical instruments – a three-dimensional treat for the ears. An immersive experience (forgive the overused and often misused phrase). In Mahler’s 4th I start in a pastoral setting after which things slowly start to disintegrate in a mildly macabre way.

The third movement adagio was breathtaking – poignant in its delicacy. A much-needed musical articulation of both hope and defiance. Soul enriching stuff. Come the final movement and the reappearance of soprano Masabane, all balance issues had been ironed out.

Conductor Adam Fischer – charming, generous, and inclusive – came alive in the symphony, signaling his appreciation to the audience at every opportunity.

I think it’s been filmed for the OAE’s catch-up service, which presumably means it will be on Marquee TV at some point.