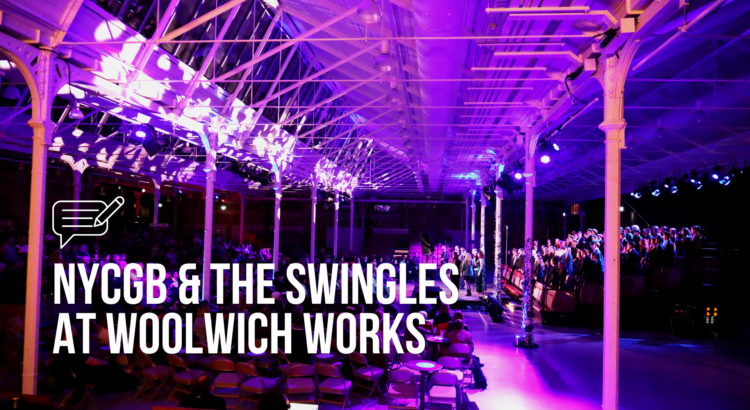 Members of the National Youth Choir of Great Britain joined forces with a-capella singing group The Swingles for a concert of music inspired by themes around climate change and the environment at a new venue in South East London last night.

In a mixed programme of music, it was the National Youth Choir of Great Britain singing unamplified who really shone, in particular during Rachel Portman and Nick Drake’s Earth Song – a captivating performance of a concise stand-alone work that combined a range of evocative theatrical treatments.

The concert was the result of a creative collaboration between The Swingles and NYCGB. The choir’s artistic director Ben Murray (and former Swingle himself) conducted both groups.

At times it felt as though The Swingles dominated the programme (though this concert being recorded for Scala Radio may indicate that it is the Swingles pop/soul content that influenced programme). There was something deeply moving about hearing unamplified voices at the top of the concert for example, making the mixed Swingle sound (eventually) more of a distraction.

The commission – Until It’s Gone – combined both groups in a satisfying way for the exciting space at Woolwich Works. The amplified bass line loops provided by The Swingles underpinned the massed vocal lines of the NYCGB created a sound that really filled the interior. Like Rachel Portman’s Earth Song, the writing is concise with a variety of different ideas strung across multiple short movements).

Come the end of the second half of the concert instinct drove me to want to hear more from the choir and see less of The Swingles bobbing around at the front of the stage. My cynicism had momentarily been held in check however during the interval when I spoke to a woman in the queue at the bar. “What brings you here today?” I asked. “My daughter,” she replied. “I stayed in London last night. I came over from Jersey on a flight yesterday. My daughter told me I didn’t have to come, but to be honest, I couldn’t not be here. I’m so proud of her.”

The biggest surprise of the evening was the splendid interior and facilities at Woolwich Works. It’s not the perfect of concert venues necessarily. The original pillars of the refurbished warehouse do interrupt the sight lines, though the raked seating in the round make for an intimate feel. Acoustically its a little challenging, hence why amplified sound carries better. But it is an exciting space to be in. The venue on the banks of the River Thames also brings a remarkable energy to Woolwich Arsenal, currently readying itself for the opening of the Elizabeth Line.