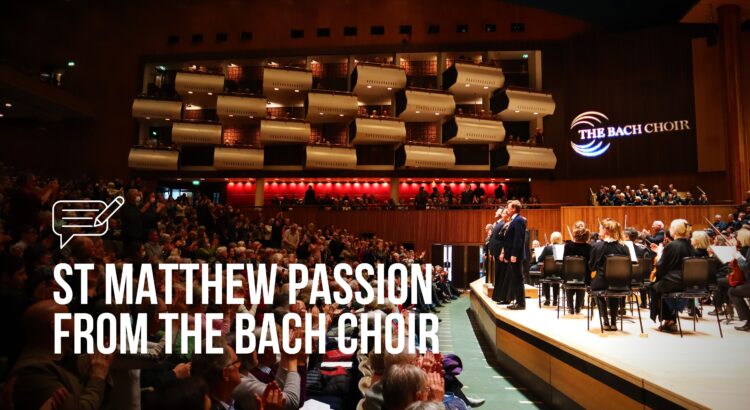 David Hill conducted the Bach Choir, Southwark Girls Choir and Finchley Music Group in a performance of Bach’s St Matthew Passion on Sunday 10 April, performing to a near-capacity audience in the Royal Festival Hall in London.

I wasn’t quite prepared for how St Matthew Passion left me feeling at its conclusion: we come to an end but it’s an extremely uneasy one. No one should leave with their heads held high. There is weight to be felt and carried out with us.

This I think only really comes across when present in a complete live performance. But there was a sense that hearing the work in English rather than German (my first time) made the story more immediate, the drama more captivating, and the pain therefore unmistakable.

Much of the emotional impact was felt thanks to the efforts of The Bach Choir and supporting groups whose ensemble work was outstanding. Singing as one, the chorus had at a times a terrifying power. The crowd call for ‘Barrabas!’ and crucifixion underscored a rage that was visceral.

The Death of Christ was devastatingly conveyed with unequivocal storytelling from Ed Lyon and Mark Stone as Christ. This was followed by a deeply unsettling extended silence during which the full horror of what has occurred collectively sinks in. After that, deft ensemble from the chorus made the subsequent moment intense.

I am not a person of faith. And yet this performance (familiar from listening to various recordings over the years) left me feeling as though I was complicit in the story. Quite some achievement.

Ed Lyon shone as the Evangelist, bringing remarkable energy to every line he sang. The higher register had a pleasingly smooth quality to it that made me conclude that I would be, truth be told, happy to listen to him sing all day long. It’s only the second time I’ve seen him sing live. He is a captivating force.

And whilst all of the ensemble deployed their expertise with remarkable effect as you would expect (Jane Irwin in ‘Buß und Reu’ was a particular high point, Sophie Bevan’s ‘Aus Liebe will mein Heiland sterben’ with flute and oboe trio similarly jaw-dropping), it’s the chorus that really deserves the greatest praise. The attention to detail in articulation and enunciation was stunning – such precision isn’t solely down to conductor David Hill’s clear direction, but the commitment each and every singer brings to the performance, I’m sure.

On a business and marketing front, I was impressed not only by the size of the audience The Bach Choir had conjured up (a considerable number of older patrons few of whom were wearing masks) and the extent to which that audience then filled nearly all of catering outlets in the vicinity during the two-hour interval. The timing of the two halves (the first half started at 11am and the second half finished at 4pm) offered enough time for batteries to recharge and attention to refocus.

There’s been a bit of comment about why this post fails to reference the orchestra who played in the concert.

For the avoidance of doubt, it was the Florilegium Ensemble who have, unbeknownst to me (because I’ve never been to a Bach Choir / Bach Passion performance before) have been ‘playing with the choir for decades’.

Had I read the programme I borrowed from the lady sat next to me in the auditorium I might have remembered. As it was, I sat and listened without any notes, totally enthralled by the voices and the story in a way I hadn’t anticipated, hence the focus of the write up below. I found an intensely moving experience as an audience member.

The absence of the orchestra’s name in the original write-up isn’t a reflection of the quality of the playing or my ignorance or thoughtlessness (though others may disagree). Rather it’s a personal reflection of my experience of this stunning performance. I’m sorry that my oversight caused the irritation it did – I can see that my inaction hurt some feelings. I’m genuinely sorry about that. I’m also disappointed the irritation has somewhat overshadowed the experience.