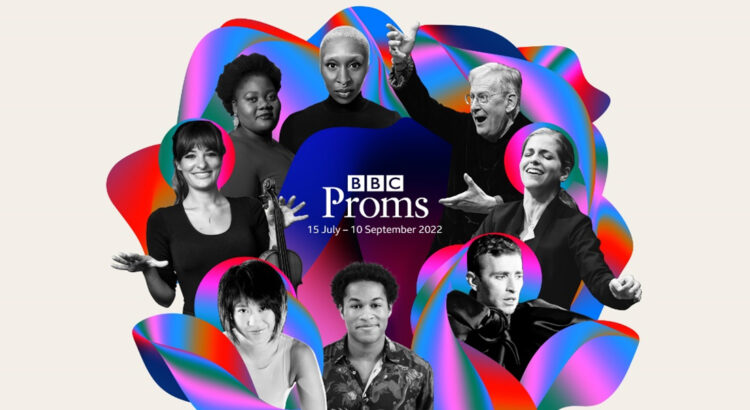 If the running order I have for the 2022 BBC Proms is the one that went to the printers then by my reckoning it’s, in terms of music at least, a return to form for the summer-long classical music festival.

Importantly too, the BBC’s flagship brand is making a big play of mounting concerts from a variety of locations across the UK too.

A mix of core repertoire thoughtfully programmed at key moments in the schedule hints at some artistic direction that seeks to respond to the challenging two years the world has faced.

The headline messages from the BBC Proms team are something like this (if that’s the kind of thing you’re after). Big scale performances, a unique contribution from the newly formed Ukrainian Freedom Orchestra (31 July), a slew of concerts from the BBC’s orchestras and ensembles, and concerts from up and down the country (not just from the Royal Albert Hall). There are concerts for kids and ‘relaxed’ concerts for the neuro-diverse.

I’m pleased to see horn player (and former Thoroughly Good Classical Music Podcastee) Ben Goldscheider debut at the Proms this year (look what a podcast appearance does for your reputation people), also the incredible Yuja Wang playing Lizst with the electrifying Klaus Mäkelä conducting on 12 August.

Verdi’s Requiem opens the season on 15 July – something of a memorial perhaps for what has gone before now, featuring the Crouch End Festival Chorus and BBC Symphony Chorus. Fitting.

Overall, in comparison to previous Proms seasons (notwithstanding the relative weirdness of the past two years), there’s more on offer that piques my interest.

There’s little that feels overtly crowbarred in (if anything I’m amazed it’s taken as long as it has to get video game music in the running order), there are just a handful of mixed genre promotions (and precious few of the often nauseating BBC-branded/themed concerts that had been appearing in the schedule in the past like the Desert Island Discs Prom).

There’s repertoire there that I haven’t previously made a beeline for (Xenakis) too, so for someone like me (long in the tooth, cynical and prone to moments of intense bitterness), there’s the opportunity for discovery. For anyone new to classical music there’s range. In that way then there’s a sense then that this is a back to what works in terms of programming. Put another way, there’s nothing on the list that immediately gets my back up.

I’m also especially impressed by the commitment to taking the Proms out of the Royal Albert Hall, to UK locations like Belfast and in particular Truro which must often feel a world away from London for classical music lovers in what is an underserved part of the country. Similarly, staging the Handel/Glass Prom at Printworks will provide entirely different visuals from the interior of the Royal Albert Hall. Seeing this event as part of the Proms family is interesting given its a co-production between a variety of organisations and the Printworks venue – will we see more of this approach in years to come?

When does the BBC Proms start and finish?

The BBC Proms runs from 15 July and finishes on Saturday 10 September. Booking opens for tickets on 21 May. Promming tickets are £6.50. Cheapest seated tickets are £8.50. Be sure to ring on the day for returns – you’ll always get something, especially if you’re happy to sit apart from your pals.

How can I listen to the BBC Proms?

Every Prom is broadcast live on BBC Radio 3. Some are on TV – BBC Four, BBC One and BBC Two. They’ll all be available on BBC Sounds for 30 days after broadcast. Some will be repeated at Christmas too. Radio 3 also repeats broadcasts of each Prom in the afternoon during the summer too. Check bbc.co.uk/proms, bbc.co.uk/sounds, or bbc.co.uk/iplayer for more information.

What are the best BBC Proms to attend?

Here are Thoroughly Good you’ll find recommendations based on my personal experience. Technically speaking there’s no such thing as ‘best’ because there are no guarantees. Classical music depends on you the listener, the mood you’re in the night you’re there.

But there are some concerts in the 72 concert line-up I’m particularly drawn to, which is what the criteria is for listing them here.

Note, as this post has been written without the brochure in my hands there’s a chance some of the details are (ever so slightly) incorrect. But, keep checking back as they will be updated.

Prom 2 / Huw Watkins Flute Concerto – Watkins is very popular amongst musicians, writes fabulous music, and I sometimes see him at my local train station when he and I are heading into or back from London.

Prom 14 / CBSO, Ben Goldscheider and Elena Urioste – both of these musicians form part of the Kaleidoscope Collective (who are brilliant), plus the gig has Rachmaninov 2 in it.

Prom 30 / Tredegar Band and the BBC National Orchestra of Wales