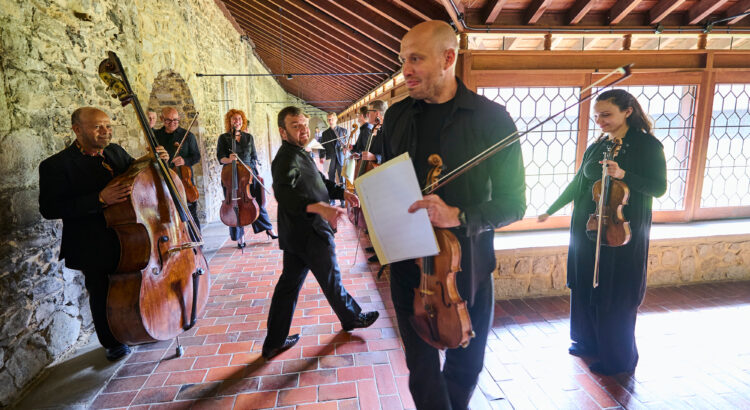 NB I attended the last two of the day’s concerts and have written about only those works I heard in full.

The premieres featured in an afternoon’s worth of concerts staged at the St Mary’s Abbey Church, each piece paired with one of Bach’s Brandenburg concertos, utilising the same instrumentation.

Many of the new pieces made reference to the defining characteristics of Bach’s writing that makes the Brandenburgs so very loved.

There were obvious references in the works I heard like direct quotations in Stevie Wishart’s piece, or the way Daniel Kidane utilised the ‘echo flutes’ underpinning a repeating rhythmic cell in the final movement of his Concerto Grosso.

Deborah Pritchard’s uplifting Illuminations were the most immediate, opening with a waterfall of sound that engaged the senses and elevated the heart rate.

Like Illuminations, Joseph Phibbs’ work Bach Shadows was concise and compelling. Entertaining throughout, the piece picked up on rhythm and texture. The second slow movement contained Phibbs’s trademark tension building writing for strings. If you’re unfamiliar, be sure to listen to the second movement of his epic Clarinet Concerto on Signum.

I enjoyed the format of proceedings. There was a pleasing simplicity to what was on offer that focussed my thinking and helped me identify detail in the writing of Bach and the modern-day composer. There was a sense of community too in the bright airy interior of St Mary’s Abbey Church. Perhaps most pleasing of all was hearing a range of different contemporary musical languages. There wasn’t a sense of competition between them, rather an opportunity to compare and contrast.

A delightful afternoon with delightful people in a chocolate box town in mid-Kent. Big shout out to harpsichordist Steven Devine whose cadenza in Brandenburg 5 was truly rock and roll. Also ‘echo flutes’ Emma Murphy and Louise Bradbury whose contribution was as satisfying as the look on their faces when they received their well-earned applause.